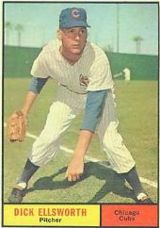 On June 16, 1958 Dick Ellsworth was signed by the Chicago Cubs as an amateur free agent. He immediately threw a four-hit shutout against the Chicago White Sox in a mid-season exhibition game. The 18-year-old left-hander then lost his only regular season start before being sent down to the Fort Worth Cats of the AA Texas League.

Dick would spend 1967 with the Phillies where he went 6-7 with a 4.38 ERA and was traded to the Boston Red Sox on December 15th along with Gene Oliver for Mike Ryan and cash. Dick had one of his most productive years for the fourth-place finishing (86-76) Red Sox in 1968, winning 16 and losing only 7 with a 3.03 ERA. Ellsworth had three years of baseball left in his arm, finishing up his 13-year major league career pitching with the Cleveland Indians and the Milwaukee Brewers from 1969 to 1971 with a career 115-137 record and a 3.72 ERA.

Dick's son, Steve Ellsworth, came up with the Red Sox in 1988 and when he won a game the Ellsworths became the first father-son combination to both win a game for Boston in franchise history. As of 2009 Dick resided in Fresno, CA, where he was in the real estate business.