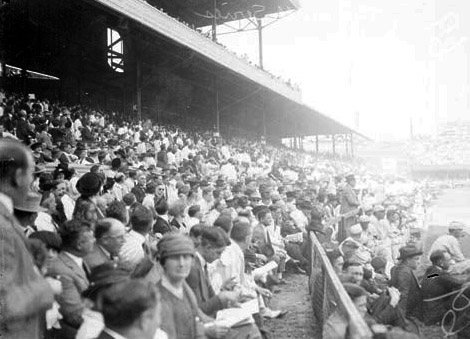 Crosley Field was originally named Redland Field and the actual stadium opened in 1912. It was located at the intersection of Findlay St. and Western Ave. Ironically just three weeks before opening day, the field was flooded by the Mill Creek flood. However, Marty Schwab and his staff was able to get the field ready for Opening Day on April 11th, in which 26,336 fans attended. The seating capacity was only 20,696 so many fans lined the outfield walls or stood in foul territory.

In 1934, Powel Crosley purchased the team and the stadium was renamed after him. Crosley Field was the scene of the first night baseball game as the Reds and Philadelphia Phillies played under the lights on May 24, 1935.

On June 11, 1938 Johnny Vander Meer pitched the first of his consecutive no-hitters at Crosley Field.

On June 10, 1944, Joe Nuxhall became the youngest person (15) to ever play in the major leagues. He pitched 2/3 inning at Crosley Field and gave up 5 runs. His next major league appearance was eight years later.

There were many changes to Crosley Field through the years including the outfield dimensions. In 1961, the entire scene of Crosley changed as a freeway was built just outside of the stadium and all of the buildings were torn down which created much of the Crosley ambience.

The last game played at old Crosley Field was on June 24, 1970 as the Reds defeated the San Francisco Giants. Bobby Bonds was the last person to swing a bat at old Crosley.

The city used the stadium as an impound lot until the facility was demolished in 1972.