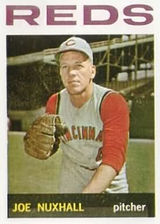 "Probably two weeks prior to that, I was pitching against seventh, eighth and ninth graders, kids 13 and 14 years old. All of a sudden, I look up and there's Stan Musial . . ." - Joe Nuxhall, about his first game as a 15-year-old major leaguer

Joe Nuxhall of the Cincinnati Reds was the youngest player to make his major league debut in the 20th Century at 15 years, 10 months, and 11 days old. He is probably also the youngest player of all time. The player once thought to hold that distinction, Fred Chapman, was recently discovered to have been Frank Chapman, a pitcher whose age was not remarkable in any way, while there are serious doubts about the true birth date of the other contender for the title, Billy Geer.

Nuxhall was actually discovered while the Reds were scouting his 34-year-old father, Orville, to fill their World War II-depleted roster. Instead, they liked what they saw of the younger Nuxhall, and the club signed him to a $175 per month contract after the school year ended. He spent most of his time sitting on the bench, but on June 10, 1944, with the Reds trailing the St. Louis Cardinals 13-0, Reds skipper Bill McKechnie put Nuxhall into a game. He walked one and retired two batters before seeing future Hall of Famer Stan Musial on deck. Nuxhall then unraveled, allowing five earned runs and failing to retire another batter.

Afterwards, Nuxhall was sent to the minors and did not pitch another major league game until 1952. He spent most of his major league career with the Reds at the time when they were known as the "Redlegs". However, he missed the club's single World Series appearance of that era, as he was pitching for the Kansas City Athletics in 1961. His best year was in 1955 when he went 17-12 and played in the All-Star Game. In the 1960s, about twenty years after his big league debut, he had another pair of fine seasons, going 15-8 in 1963 and 11-4 in 1965.

On July 24, 1965, Joe Nuxhall pitched a complete game one-hit shutout of the Houston Astros, winning 2-0. The only hit for the Astros was a single by Bob Lillis with one out in the bottom of the 8th. The Reds scored both of their runs in the top of the 8th on a triple by Pete Rose.

Nuxhall called Reds games on WLW from 1967 to 2004, primarily paired with Marty Brennaman. Nuxhall's trademark phrase at the end of broadcasts was: "this is the old left-hander, rounding third and heading for home."

Nuxhall died at age 79 after suffering from cancer and pneumonia. His younger brother, Don Nuxhall, pitched in the minor leagues.

"I’ve known Joe my entire life. . . You never heard anyone ever say a bad word about him." - Ken Griffey