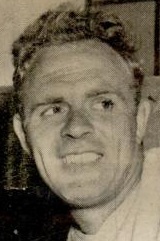 "At least once a day I hear about my no-hitters. It's just something that's caught the public's imagination." - Johnny Vander Meer, decades after his feat

"I could've kissed him - the tension was eating me up." - Johnny Vander Meer, about Debs Garms finally getting a hit off him in the fourth inning of the game after his two no-hitters, one in which he pitched a three-hitter while Cy Young was in attendance

In June of 1938, Johnny Vander Meer pitched no-hitters in two consecutive starts. While he is remembered mainly for those two performances, he pitched 13 seasons in the majors, with 119 victories, and 11 years in the minors, with 76 wins.

His no-hitting streak actually ran 21 2/3 innings, counting the hitters he retired in games before and after his two no-hitters. The second no-hitter was on the occasion of the first night game played at Ebbetts Field, one at which he was honored before the game because the team knew hundreds of fans from his hometown in New Jersey had come to see him pitch. Vander Meer, who frequently had trouble with control, walked eight men in the second no-hitter. The two no-hitters came in the middle of 8 consecutive winning starts. Source: Vander Meer's New York Times obituary.

Many years later, in 1952 in the Texas League, Vander Meer pitched another no-hitter.

Vander Meer led the National League three times in strikeouts and appeared in the 1940 World Series. While he threw his no-hitters in 1938, a year in which he went 15-10, his best full year was probably 1942 when he went 18-12 and was fourth in the National League in ERA at 2.43.

In three All-Star appearances, he allowed no earned runs in eight and two-thirds innings.

Johnny struggled enough with his control that he spent half of 1940 in the minors with the Indianapolis Indians, where he posted a 2.40 ERA but still walked 65 men in 105 innings.

He went 19-6 for the Durham Bulls in 1936 and made his major league debut in April 1937. Frank McCormick was also on the Durham team and would come up to the Reds to be a star along with Vander Meer in the late 1930s and 1940s. McCormick left the team after 1945 (the Reds sold him to the Philadelphia Phillies) while Vander Meer was with the Reds through 1949 (when the Reds sold him to the Chicago Cubs).

Vander Meer entered the Navy in March 1944 and was discharged in December 1945.