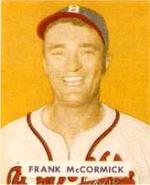 Frank McCormick was a nine-time All Star who won the MVP award in 1940. He also had several other excellent seasons.

McCormick was part of an unusual play in the 1938 All-Star Game. He hit a single in the seventh inning. Leo Durocher came up next and did a sacrifice bunt. Jimmie Foxx picked up the ball and threw it into right field, where Joe DiMaggio was playing. (It being the All Star Game, DiMaggio was not in his usual center field.) DiMaggio threw the ball to home, over catcher Bill Dickey's head, and McCormick scored. Durocher never stopped running until he reached home.

He almost never struck out, with the highest single-season total coming in his MVP year, when he had only 26 strikeouts. Partly, he struck out seldom because he liked to hit the first pitch.

At the end of his career, he played for the "Spahn and Sain" 1948 Braves, going to the World Series with them. McCormick batted 5th in the 3rd game of the Series, and also pinch-hit in a couple other games.

According to similarity scores, the most similar player to McCormick is a Hall of Famer, George Kelly.

After his playing career ended, Frank McCormick was a minor league manager and a member of the Cincinnati Reds coaching staff in 1956 and 1957. He also served as a scout, coach, and broadcaster.