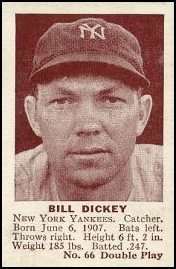 Inducted into Hall of Fame in 1954

The brother of George Dickey, catcher Bill Dickey was a mainstay behind the plate for the New York Yankees for almost two decades. During that time, he made the All-Star team eleven times.

Dickey entered the U.S. Navy on March 15, 1944 and served at the Navy Hospital Area in Hawaii. He was discharged in January 1946; one of his main tasks had been to organize recreational activities in the Pacific. He returned to the Yankees that year and spent part of the 1946 season as player/manager with the team. He returned to the team as a member of their coaching staff from 1949 to 1957 and again in 1960.

He was inducted into the Hall of Fame in 1954. Dickey was highlighted in Heroes Behind the Mask as one of the top catchers of all-time. He is considered the first of the string of great Yankees catchers that continued with Yogi Berra, Elston Howard, Thurman Munson and, after a hiatus of two decades, Jorge Posada.

He made his first Baseball Card appearance in the 1932 U.S. Caramel set.