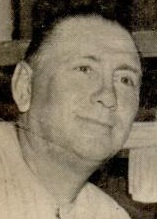 First baseman Johnny Neun began his pro career in 1920 and reached the majors with the Detroit Tigers, spending four years with the club beginning in 1925. On July 9, 1927, he stole five bases in one game against the New York Yankees. Four days later, against the Washington Senators, he swiped home twice in a doubleheader, once in each game. After spending 1929 back in the minors, he played two seasons with the Boston Braves.

Neun then played for the Newark Bears from 1932 to 1934, serving as a player/coach in his final season. After time as manager of the Akron Yankees and the Norfolk Tars, he returned to Newark in 1938 as the club's skipper, a post he held through 1941. After managing the Kansas City Blues for two years, he was a member of the New York Yankees coaching staff from 1944 to 1946, when he replaced Bill Dickey as the club's manager late in the season. He then went on to manage the Cincinnati Reds for a season and a half before spending more than 40 years as a scout for the Yankees, Kansas City Royals, California Angels, and Milwaukee Brewers.

Neun is linked with Jimmy Cooney Jr.. Both born between the 1900 and 1901 seasons, they turned unassisted triple plays on consecutive days in 1927: Cooney on May 30th and Neun on May 31st. They later became teammates on the 1930 Braves. In 1986, Sports Illustrated set up a phone call between the two men, now in their 80s, to discuss their unique footnote in history. Neun's was the first UTP ever to end a game: the second was by Eric Bruntlett in 2009.