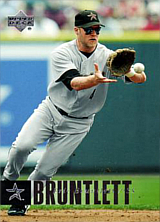 Despite spending most of his big league career as a utility player, Eric Bruntlett was one of the stars of the 2008 World Series and later accomplished a defensive feat that had only been done once before in major league history.

After graduating from Harrison High School in West Lafayette, Indiana, where he starred in baseball and football, Bruntlett was picked by the Los Angeles Dodgers in the 72nd round of the 1996 amateur draft. He did not sign and instead went on to Stanford, where he led the school to three College World Series appearances in four years. Bruntlett was then chosen by the Houston Astros in the ninth round of the 2000 amateur draft. He was signed by scout Gene Wellman and made his pro debut that summer. After reaching the majors with Houston in 2003, he split the following season between the Triple A New Orleans Zephyrs, for whom he hit .252 with 6 home runs and 37 RBI, and the Astros, for whom he played in six postseason games. He remained with the big league club for the entire 2005 campaign, appearing at every defensive position except pitcher and catcher during the course of the season, and played in ten postseason contests as the Astros reached their first World Series.

Following two more seasons with the Astros, Bruntlett was traded to the Philadelphia Phillies, along with Brad Lidge, after the 2007 campaign. In his first year in Philly, he set career bests with 120 games played, 212 at bats, 37 runs scored, 46 hits, and 15 RBI. That October, he was one of the unexpected heroes of the club's World Series victory over the Tampa Bay Rays. In Game 2, he hit a pinch home run against David Price. Then, in Game 3, he led off the ninth inning by being hit by a pitch from Grant Balfour and came around to score the winning run. In Game 5, he pinch ran for Pat Burrell at second base with the score tied in the seventh inning; he moved to third on Shane Victorino's ground ball and scored the winning run on Pedro Feliz's single. All of these feats were achieved without starting a single game.

On August 23, 2009, Bruntlett was playing second base for the Phillies, who were leading the New York Mets, 9 to 7. With runners on first and second and no outs in the ninth inning, he caught a line drive off the bat of Jeff Francoeur. Both runners were running on the pitch, and Bruntlett was heading towards second when he caught the ball for the first out, stepped on the bag to retire Luis Castillo for out number two, and then turned around and tagged Daniel Murphy, who had almost reached second, to complete a game-ending unassisted triple play. It was only the second time in major league history that a game had ended on such a defensive gem; the other occasion was by Johnny Neun, playing first base for the Detroit Tigers, on May 31, 1927. Eric only appeared in four more big league games, finishing his career split in the systems of the Washington Nationals and New York Yankees in 2010.