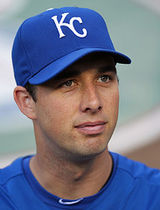 Outfielder Jeff Francoeur was a high school All-American in baseball and his school won back-to-back state titles in both football and baseball in Georgia's largest high school athletic classification. Parkview High School defeated a Lowndes County team led by Stephen Drew to win the baseball title in his junior year.

Francoeur was also considered one of the top high school defensive backs in the country as a football player and signed a letter-of-intent with Clemson University and would have played at safety for the Tigers football team, as well as playing for Clemson's baseball team.

Francoeur was selected by the Braves in the first round of the 2002 amateur draft and soon signed with scout Al Goetz of his hometown team. Francoeur advanced steadily through the Braves minor league system playing for the Rookie-level Danville Braves in 2002, the Class A Rome Braves in 2003, the A-Advanced Myrtle Beach Pelicans and Greenville Braves (AA) in 2004, and the AA Mississippi Braves in 2005. He was part of the group of rookie players nicknamed the "Baby Braves" that Atlanta called up from its minor league system during the 2005 season.

He was recalled from AA in July 2005 after an injury to Brian Jordan. Francoeur hit a three-run homer in his first major league game and batted .413 through the first month of his career. Jeff Francoeur's 13 outfield assists in 67 games as a rookie in 2005 were third among all major league outfielders, an average of one assist every 5.15 games. Predictably, baserunners were taking fewer chances against Francoeur's arm in 2006. In his first few seasons in Atlanta, it looked like he was headed for superstardom. After hitting .300 with 14 homers and 45 RBIs in only 70 games in 2005, he played every game for the Braves in both 2006 and 2007, hitting .250 with 29 homers and 103 RBIs the first year, and .293 with 19 homers and 105 RBIs the second. He hit .235 with a double and a triple in 4 games as Atlanta lost to the Houston Astros in the 2005 NLDS. The Braves fell as a team after that postseason appearance, but Jeff was one of the bright lights that seemed to project a quick return to contention. There was a major flaw in his game, however, and it was his chronic inability to reach base consistently. In 2006, for all his offensive production, his OBP was only .293, and it only improved to .338 the next year, which meant that his OPS+ was a poor 87 in 2006, and only 102 the next year - definitely not the numbers of a budding superstar.

The bottom then fell out in 2008. He hit only .239 in 155 games that year, with 11 homers and 71 RBIs, leading to a dismal OPS+ of 72, awful for a corner outfielder who was playing every day. He was no longer being talked about as the future of the Braves franchise, and in fact, after he started the 2009 season slowly, hitting .250 in his first 82 games, he was traded to the New York Mets in return for Ryan Church on July 10th. He continued to play regularly for the Mets, much to the dismay of their sabermetrically-inclined fans who raged on blogs about management giving so much playing time to a very flawed player. He did bounce back a bit in the second half, hitting .311 with 10 homers and 41 RBIs in 75 games in the Big Apple, but that still only gave him an OPS+ of 93 for the year, in spite of 32 doubles, 15 homers and 76 RBIs. He was back starting in right field in 2010, but there was no hiding his shortcomings. He was hitting only .237 in 124 games when on August 31st, he was dealt to the Texas Rangers in return for IF Joaquin Arias. While the Rangers did not intend to use him as a starter, they were a postseason-bound team, and he got hot in September, as he hit .340 in 15 games. That made him valuable enough to be kept on the postseason roster and he followed the team all the way to the World Series, even though he did not contribute much to that run, with 3 hits in 24 at-bats (.125) in three series.

Having now washed out of two National League teams, it seemed unlikely that Francoeur would get another opportunity to start in the majors again, but the Kansas City Royals came calling in 2011 and he spent the next two seasons as their starting right fielder, with 153 games in 2011 and 148 in 2012. His first season was surprisingly good as he hit .285 with 47 doubles, 20 homers with 77 runs and 87 RBIs, for an OPS+ of 119. He still had an awful K/W rate at 123 Ks and 37 walks, but he did enough other things well to compensate and bring value to the table. It was not the case the second year though, as his batting average fell to .235 and the rest of his numbers followed suit. His OBP was down to .287 and his OPS+ to 80. He was still with the team at the start of 2013, but no longer starting. His numbers fell some more, to .208 in 49 games but when he was handed his unconditional release on July 5th, the injury-racked San Francisco Giants decided to give him a shot. He played predictably badly and was released again after six weeks of hitting .194 with no power. In spite of that clear downward spiral and playing well below replacement-level in 2013, he still managed to find another major league job in 2014. This time with the San Diego Padres. He hit rock bottom with an .083 average in 10 games. He was released again and his career seemed well and truly over.

Jeff had a trick up his sleeve, however. He surprised everyone by winning a job as the Philadelphia Phillies' fourth outfielder out of spring training in 2015. In his first visit to Citi Field with the Phillies in April that year, he put on a power display in batting practice, repeatedly pulling balls over the left field fence, which had been brought in before the season. Seeing Mets owner Jeff Wilpon in the stands, he quipped: "You know, if you'd moved the fences in while I was here, I'd still be here." He had last played for the Mets in 2010. He was one of the Phillies' better hitters in the early going, which was not saying much as the team was playing quite poorly and was struggling to put runs on the scoreboard. On June 16th, it was their pitching that imploded however, and manager Ryne Sandberg asked Jeff to take the mound with the Phils trailing 17-3 in the 7th inning. He retired all three batters he faced that inning, but in the 8th, he walked three, hit a batter and gave up a solo home run to Ryan Flaherty, resulting in 2 runs; the homer allowed the Orioles to set a new team record with 8 long balls in one game. "I kind of got to experience everything that a pitcher probably experiences over a year in two innings," Francoeur said of his stint on the mound. He hit two game-winning homers in a span of a week for the Phillies after the All-Star break. The first came on July 19th off A.J. Ramos of the Miami Marlins, a two-run walk-off homer that turned a 9th-inning 7-6 deficit into an 8-7 win. The second was on July 24th, a 10th-inning two-run shot off Rafael Soriano of the Chicago Cubs that proved the difference in a 5-3 win on the road. There was speculation he would be moved at the trading deadline, however he stayed put and ended up playing more innings in right field than anyone else on the team, ahead of Domonic Brown who was injured for much of the year. In 119 games, he hit .258 with 16 doubles, 13 homers and 45 RBIs, not bad for someone who had been picked up off the scrap heap. His OBP, always his Achilles' heel, was a dismal .286 however.

It took Jeff some time to find a team for 2016, as the Phillies were now in full rebuilding mode and were not interested in an outfielder on the wrong side of 30 with obvious holes in his game. On February 22nd, his original team, the Atlanta Braves, also undergoing a major re-build, took a flyer on him, offering him a minor league contract. He hit well in spring training and made the team as a back-up outfielder. In 99 games, he hit .249 with 7 homers and 33 RBIs, demonstrating he still had value. On August 24th, he was traded to the Miami Marlins, who had recently lost RF Giancarlo Stanton for an extended period, in return for minor leaguers Dylan Moore and Matt Foley, in a deal also involving the Texas Rangers, who received three international signing slots as intermediaries in the deal. On September 10th, his two-out single in the 8th off Joe Blanton of the Los Angeles Dodgers broke an unprecedented bid for a combined perfect game, as Rich Hill had started the game with 7 perfect innings before being removed by manager Dave Roberts. He hit .280 in 26 games for the Fish, ending what turned out to be his final season at .254 in 125 games.

Following his retirement, he became a broadcaster on Atlanta Braves telecasts.