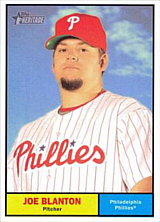 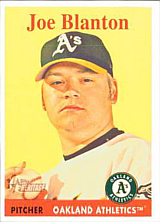 Pitcher Joe Blanton was an unimpressive 13-12, 5.11 during his three years at Kentucky. After he led the SEC with 133 strikeouts in 100 innings as a junior, he was chosen by the Oakland Athletics in the first round of the 2002 amateur draft (24th overall). He was signed by scout Rich Sparks for $1.4 million and made his pro debut that season, going 1-1, 3.14 with 15 strikeouts and 2 walks in four games for the Vancouver Canadians of the Northwest League and 0-1, 7.50 with 6 strikeouts and 6 walks in two games for the Modesto A's of the Carolina League. He split 2003 between the Kane County Cougars of the Class A Midwest League and the Midland Rockhounds of the AA Texas League, going 11-8 with a 2.29 ERA and 174 strikeouts combined at the two stops, before making one postseason appearance out of the bullpen for the AAA Sacramento Rivercats. He led the Midwest League with 144 strikeouts and was second to John Maine in total minor league strikeouts. He was named the #5 prospect in the Midwest League by Baseball America and the #20 pitching prospect in the minors. He was 7th in the MWL in ERA (2.57). He returned to Sacramento the next year and went 11-8 with 143 strikeouts, a 4.19 ERA, 35 walks and 199 hits allowed in 176 innings before being recalled by Oakland in September. He was seven strikeouts behind Pacific Coast League leader (and future teammate) Dan Haren. He was also the starting pitcher for the USA team in the Futures Game, hurling one scoreless inning, allowing hit and a walk and fanning one.

Blanton spent the entire 2005 season in the A's rotation, going 12-12 with a 3.53 ERA in his rookie season. In 2006, he logged 16 wins for the Athletics, against 12 losses, although he surrendered 241 hits in only 194 1/3 innings on the mound. His high ERA (4.82) kept him out of the starting rotation in the postseason, and he made a single appearance as a reliever, pitching two scoreless innings in the Championship Series against the Detroit Tigers. He had another solid, if unspectacular, season as a starter for the A's in 2007, posting a record of 14-10, 3.95 and pitching a career-high 230 innings as the team fell out of contention. On July 18, 2008, Blanton was traded to the Philadelphia Phillies for three prospects: second baseman Adrian Cardenas, left-handed pitcher Josh Outman and outfielder Matt Spencer. He was having an unimpressive season for the A's, having gone 5-12 with a 4.96 ERA in 20 starts over the season's first half. The division-leading Phillies were interested in his proven capacity to eat innings and were not looking for an ace. It was the second trade in a week by Oakland involving a front-line starter, following a deal immediately before the All-Star break that sent Rich Harden and Chad Gaudin to the Chicago Cubs. Blanton went 4-0 in 13 starts for the Phillies in the second half of 2008 and was in the postseason rotation. He won Game 4 of the 2008 World Series and homered, the first World Series home run by a pitcher since Ken Holtzman in the 1974 World Series.

Joe had a good year as a starter for the Phillies in 2009, going 12-8, 4.05 in 31 starts and pitching 195 1/3 innings while striking out a career-high 163 batters. He was again active in the postseason, making two relief appearances in the NLDS against the Colorado Rockies, then pitching 6 innings with a no-decision in a start in the NLCS against the Los Angeles Dodgers. He started a game against the New York Yankees in the 2009 World Series, giving up 4 runs in 6 innings in another no-decision. He fell to 9-6 in 2010, making only 28 starts. He did get to start a game in the NLCS, but was pulled against the San Francisco Giants in the 5th inning and did not figure in the decision. He started 2011 in the Phillies' juggernaut starting rotation that also featured Roy Halladay, Cliff Lee, Cole Hamels and Roy Oswalt, but after making 6 starts and sporting a record of 1-2, 5.50, he was placed on the disabled list with nerve inflammation in his elbow, virtually ending his season. He made a handful of appearances in September, enough to show he was back in health and to lower his season's ERA to 5.01. He pitched a scoreless inning in his only appearance in the NLDS against the St. Louis Cardinals. 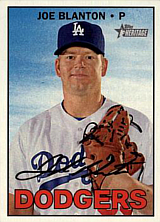 Blanton was back in the Phillies' starting rotation at the start of the 2012 season, but the team, racked by injuries, had its first poor season in a number of years, and was in a mode to shed some veteran players when the trading deadline rolled around. Blanton was 8-9, 4.59 in 21 games and rumored to be on the trading block, but survived the deadline, while two teammates, outfielders Shane Victorino and Hunter Pence were traded. Only three days later, on August 3rd, he was placed on waivers and claimed by the Los Angeles Dodgers. He made 10 starts for the Dodgers, going 2-4, 4.99, to finish the season a combined 10-13, 4.71 in 31 games and 191 innings. He became a free agent after the season and moved across town, signing a deal with the Los Angeles Angels of Anaheim on December 12th. Blanton had a rough start to his season with the Halos in 2013. He was winless over his first 9 starts, being saddled with an ugly record of 0-7, 6.62, and giving up an American League-leading 86 hits over 50 1/3 innings. He finally recorded his first win on May 23rd when he gave up 2 runs in 6 1/3 innings against the Kansas City Royals; the Angels used 6 different relievers to finish the game, hanging on for the 5-4 win with Robert Coello picking up his first career save. The rest of the year did not go much better, as he finished 2-14, 6.04 in 28 games. The Angels did not want him back, and he signed with the Oakland Athletics in 2014. He did not make the team out of spring training, and after a couple of starts for the AAA Sacramento RiverCats he announced his retirement.

After taking most of the year off, he changed his mind and, in February 2015, signed a minor league deal with the Kansas City Royals. He started the season in the minors, but made it to Kansas City by mid-May, where he was used as a swingman alongside another veteran, Chris Young, taking an occasional turn in the starting rotation and helping out in the bullpen when not required to start, On July 19th, he picked up the first save of his career in his 278th major league game when he relieved Danny Duffy after he had given up a solo homer to Tyler Saladino in the 9th inning to lose a shutout bid against the ChiSox. Blanton recorded the final three outs to close out the 4-1 win that put the Royals 20 games above .500 at that point. When the Royals landed Johnny Cueto in a deal at the trading deadline, it made Joe supernumerary, but he found another good home when he was sold to the Pittsburgh Pirates on July 29. He was 2-2, 3.89 in 15 games in his time with Kansas City, then was even better in Pittsburgh, with a record of 5-0, 1.57 in 21 games, all in relief.

On September 10, 2016, he was back pitching for the Los Angeles Dodgers when his manager, Dave Roberts put him in a game in a completely unprecedented situation, at least at the major league level. Rich Hill had started the game against the Miami Marlins by retiring the first 21 batters and was still going strong when Roberts decided to pull him, wary of previous blister problems Hill had encountered. Thus, Blanton entered the game in the 8th with a perfect game on the line, something that had never previously happened. He struck out Christian Yelich and got Marcell Ozuna on a ground out, but Jeff Francoeur broke up the bid with a two-out single to left. Overall, he had a solid season as a set-up man for closer Kenley Jansen, going 7-2, 2.48 in 75 games, with 80 strikeouts in 80 innings while recording 28 holds in 29 opportunities. Things did not go as well in the postseason. He was excellent in the Division Series against the Washington Nationals, giving up only a hit and a walk in 5 innings of work, but in the NLCS, the Chicago Cubs tagged him for 7 runs in 2 innings and he was charged with two losses, in Games 1 and 5. In the first, he allowed homers to Miguel Montero and Dexter Fowler in a 5-run 8th inning, and in Game 5, Addison Russell took him deep in the 6th.

Blanton became a free agent after the 2016 season and, even with his solid previous regular season, he found it hard to find a team, leading observers to comment that the game had now become hostile to older players (he had just turned 36), even though they were still solid contributors. In any case, it was announced on February 28, 2017, that he had signed a one-year deal with the Washington Nationals for $1 million. He battled through a bout of shoulder inflammation and a crippling inability to avoid surrendering the long ball, allowing 10 in 44 1/3 innings (51 appearances). After the season, he retired once more.