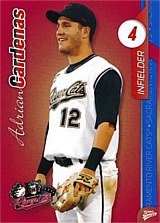 Infielder Adrian Cárdenas was selected by the Philadelphia Phillies in the 2006 amateur draft. He was signed by scout Miguel Machado for $925,000 and made his pro debut that summer with the GCL Phillies, where he hit .318 with 2 homers and 21 RBI. He spent the 2007 season with the Lakewood Blue Claws, hitting .295 with 9 home runs, 79 RBI, and 20 stolen bases. Cárdenas was the backup second baseman for the USA in the 2007 Futures Game, singling against Pedro Beato.

On July 17, 2008 he was traded by the Phillies with Matt Spencer and Josh Outman to the Oakland Athletics for Joe Blanton. Adrian hung around Oakland's system through 2011, with a brief stint on the 40-man roster. He was claimed on waivers by the Chicago Cubs before the 2012 season, making his lone big league appearances. In 45 games, he hit .183 in 60 at bats. After the season, he abruptly retired, stating he did not enjoy the game anymore.

He obtained a master of fine arts degree from New York University in 2018.