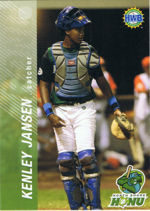 Kenley Jansen, who was a minor-league position player, converted to pitcher in 2009 and was successful enough that he made his major league debut on July 24, 2010 with the Los Angeles Dodgers. In 2011 he broke the all-time strikeout-per-nine-innings record, finishing with 96 strikeouts in 53.2 innings, for a 16.1 ratio of strikeouts per nine innings (minimum 40 innings).

He is the younger brother of former minor leaguer Ardley Jansen. In his first three minor league seasons, he led the league in a defensive department while his offensive production varied. When his career as a catcher stalled, he became a pitcher.

He was on the preliminary 42-man roster for the Dutch national team for the 2008 Olympics. Of the five catchers listed, he was the only one who had not played for the national team but also the only one with experience in US minor leagues (Tjerk Smeets and Sidney de Jong had played college baseball in the USA). He did not make the final cut.

Jansen pitched a scoreless inning against the New York Mets in his major league debut on July 24, 2010, then earned his first major league save by pitching the 9th inning of a 1-0 Clayton Kershaw victory over the Mets the next day. He recorded two strikeouts in each of his first two major league innings. Kenley enjoyed his first major league at-bat, drawing a walk and scoring a run. Manager Joe Torre observed that Jansen seemed to know what he was doing as a batter and a baserunner, and then recalled that a year ago, Jansen had been a catcher. He finished that first season with a record of 1-0, 0.67 and 4 saves in 25 games, striking out 41 batters in 27 innings.

Kenley spent most of 2011 with the Dodgers, making 51 appearances out of the bullpen with a record of 2-1, 2.85, and 5 saves. His 96 strikeouts in 53 2/3 innings gave him the highest ratio ever for a pitcher throwing 40 or more innings. However, he missed four weeks of the season when he was diagnosed with an irregular heartbeat, and had to take blood thinners to control the condition. He had a recurrence of the condition in spring training in 2012, but not severe enough to place him on the disabled list. He was anointed as the team's closer in late April, replacing Javy Guerra, and did quite well, saving 25 games in 56 appearances while going 5-3 with a 2.54 ERA. He struck out 86 in 56 2/3 innings, an outstanding ratio even if behind the previous season's record pace, and walked only 19. However, on August 29th, he was again sidelined by his recurring heart condition. He came back to pitch in late September, but Brandon League had assumed closer duties in his absence and finished the year in the role. Jansen ended the season with a record of 5-3, 2.35 in 65 games, with 25 saves and 99 strikeouts in 65 innings. On October 23rd, he underwent surgery to correct the heartbeat problem.

Jansen initially decided not to play for the Dutch team in the 2013 World Baseball Classic, having been a catcher for them in the event four years prior. After the Netherlands surprisingly made it to the final four, though, he agreed to be an injury substitution for Jonatan Isenia. He did not pitch in the only game he was on the roster, a 4-1 semifinal loss to the eventual champion Dominican national team; the Orange used Diegomar Markwell, Tom Stuifbergen, Leon Boyd and Loek van Mil instead.

He was again the Dodgers' closer in 2013 and picked up 28 saves while being nearly unhittable. In 75 games and 76 2/3 innings, he gave up 48 hits and 18 walks while striking out a whopping 111 batters. His record was 4-3, with an ERA of 1.88. He pitched 6 times in the postseason, picking up a save in both the Dodgers' NLDS win over the Atlanta Braves and their loss in the NLCS against the St. Louis Cardinals, although he did give up 2 runs on 5 hits in 2 innings in that latter series after being his typical lights out against the Braves. He was still the Dodgers' closer in 2014, even though the team had three former All-Star closers in its bullpen in Brandon League, Brian Wilson and Chris Perez. The three were now his set-up men, however, and he showed he was the boss on opening day, preserving a 3-1 win over the Arizona Diamondbacks in Sydney, Australia on March 22nd. He was a very busy man in the season's early going, appearing in 15 of the Dodgers' first 22 games, a pace that would have him shatter Mike Marshall's all-time record of 106 appearances in a season, set for the Dodgers in 2014. Manager Don Mattingly was conscious that this was not sustainable, however, and said he would reduce his closer's workload over the rest of the year. He ended up making 68 appearances and saving a career-high 44 games, while striking out 101 batters in 65 1/3 innings. He also recorded a save in his only outing of the postseason, in Game 2 of the NLDS against the Cardinals, but it turned out to be the Dodgers' only win of the series.

Jansen suffered a setback just as spring training was about to open in 2015 as he had to undergo surgery to remove a growth from a bone in his left foot. The operation was expected to put him out of action for two to three months, delaying the start of his season. He made his first appearance for the Dodgers on May 15th and it was a memorable one, as he struck out four batters in one inning on 14 pitches against the Colorado Rockies; a passed ball by Yasmani Grandal forced him to record an extra out. He managed to make it into 54 games and to pick up another 36 saves in spite of the time missed, in addition to going 2-1 with a 2.41 ERA. He struck out 80 batters in 52 1/3 innings. He picked up two more saves in three scoreless appearances against the New York Mets in the Division Series, but once again, the Dodgers' season ended in disappointment as they lost that series in five games.

On June 15, 2016, Kenley recorded the 161st save of his career in a 3-2 win over the Arizona Diamondbacks, tying him with Eric Gagné for most in Dodgers history. He passed Gagné with his next save on June 20th. On August 24th, he tied Jim Brewer for most career strikeouts by a Dodgers reliever, with 604. He went 3-2, 1.83 in 71 games that season, picking up 47 saves to be named the recipient of the Trevor Hoffman Award as the best relief pitcher in the Natinal League. In the postseason, he picked up 2 saves in the Division Series against the Washington Nationals and one more against the Chicago Cubs in the 2016 NLCS. In that latter series, he totaled 6 1/3 innings of work in 3 games, giving up only one hit and no walks while striking out 10 as Dave Roberts used him as much as possible given the ineffectiveness of other Dodgers relievers. He became a free agent after the season, and while the Dodgers were well into luxury tax territory by then, his return was considered essential to their continued success. On December 12th, it was reported that he had agreed to a five-year deal worth $80 million.

Jansen started the 2017 season by recording 36 strikeouts without issuing a single walk, breaking the major league record set by Adam Wainwright in 2013. The total eventually reached 51 until he allowed his first walk of the season on June 25th, in a non-save situation against the Colorado Rockies. It was his 31st game of the season, tying a record set by Mark Eichhorn in 1991. He needed the work as the Dodgers won their 10th straight game that day, but were winning with such large margins that Jansen was not needed to save games. He thus entered the game in the 8th, and in the 9th received a rare at-bat, and used it to hit a double for the first RBI and extra-base hit of his career. He was named to the All-Star team for the second time that year and pitched a scoreless 9th inning with the score tied at 1, although he had to strike out the side with a runner in scoring position after allowing a lead-off single and a stolen base to Yonder Alonso, and then allowing him to advance to third on a balk. He finished the year at 5-0, 1.32 in 65 games, with 41 saves and 109 strikeouts in 68 1/3 innings. He repeated as the Trevor Hoffman Award winner. In the postseason, he pitched scoreless ball over 7 appearances in the Division Series and NLCS, saving three games and picking up a win in the process. In the World Series against the Houston Astros, he pitched in 6 of the 7 games as manager Dave Roberts relied heavily on his relievers. He saved Game 1, but was charged with a blown save in Game 2 on October 25th when he was asked to record a two-inning save, but allowed an inherited runner to score in the 8th, and a game-tying homer by Marwin Gonzalez to lead off the 9th. Houston then won the game in 11 innings in what was a key turning point in the series, as had he managed to save the game, Houston would have fallen into a deep two-games-to-none hole. He had another key outing in Game 5 as L.A.'s seventh pitcher of the game in the 9th. The wild game was tied 12-12 at that point, but after a scoreless 9th and two quick outs in the 0th, he allowed a hit batsman, a walk and a game-winning single by Alex Bregman to hand Houston another key win. He then turned around to save Game 6 with another two-inning performance and even though he had been heavily solicited all series, added another scoreless inning in Game 7, the 7th, but the Dodgers were already down 5-1 by that point and were unable to erase their early deficit.

He had another great first half in 2018, returning to the All-Star Game for the third straight year. On August 9th, he was tied for the NL lead with 32 saves when he was sent back to Los Angeles before a game against the Colorado Rockies because of an irregular heartbeat. He had dealt with the issue before, undergoing an operation in 2012, but doctors in Denver had needed to use an electric shock to get his heart back into rhythm, and he was placed on the disabled list. He returned to the mound on August 20th, although it was not the greatest of outings as he gave up a pair of homers to Jedd Gyorko and Matt Carpenter of the St. Louis Cardinals in the 9th inning of a 5-3 loss. Asked about his ailment, he said he had been cleared by his cardiologist and spoke with some fatalism: "If it goes, it goes." He was also planning to undergo more surgery in the off-season. Still, as a measure of precaution, he decided to skip a September trip to Colorado, as the altitude there had been a contributing factor to his recent troubles. He finished the year at 1-5, 3.01, with 38 saves in 69 games. He was unscored upon and saved 3 games in the first two rounds of the postseason, but had no opportunity to save a game in the World Series, as he gave up 2 runs in 4 innings in 3 appearances while the Dodgers lost in 5 games to the Boston Red Sox. He underwent heart surgery on November 26th. It was successful, and he decided to lose weight afterwards as part of his rehabilitation efforts, in order to lessen the strain on his heart in the future.

Jansen has been compared to the great Mariano Rivera because he too throws an outstanding cutter, a pitch that has been likened to an optical illusion because it does not seem to end up where it appears to be headed.