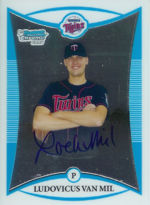 Loek van Mil pitched as high as AAA and appeared frequently for the Dutch national team. He also pitched in Japan and Australia. 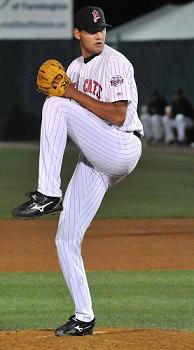 van Mil in the Minors.

Van Mil began 2008 with the Beloit Snappers and was 2-2 with 3 saves and a 3.22 ERA and 42 strikeouts in his first 44 2/3 IP. He was then placed on the Dutch roster for the 2008 Olympics but was injured prior to the Games and was replaced by veteran Dave Draijer. Because of that injury, he could not participate in the 2009 World Baseball Classic. After missing the first seven weeks of the 2009 season while in rehab, he was added to the Fort Myers Miracle roster, competing in the Advanced A Florida State League. Later that year, he was promoted to the New Britain Rock Cats in the AA Eastern League. He finished the year 1-1 with a 2.79 ERA in 42 games between the two clubs.

He finally got to pitch for the Netherlands in the 2012 European Championship after having last appeared for them in 2007 and missing two major events with injury. He allowed four hits in three innings for the Silver Medalists. He failed in a key situation in an upset loss to the Czech national team. Relieving David Bergman in the 10th with the bases loaded, a 1-1 score and no outs, he allowed a sacrifice fly to Jakub Malík and got Pavel Budský to hit into a run-scoring double play; the Netherlands got one in the bottom of the frame for a 3-2 loss. Against Spain, he saved a 2-0 win for Rob Cordemans, but allowed hits to Franklin Tavarez and Paco Figueroa before recovering to get Dewis Navarro, Jesús Golindano and José Luis Riera. That off-season, he signed with the Cincinnati Reds.

He was a big part of the Netherlands' surprising run to the final four in the 2013 World Baseball Classic, pitching four times and throwing four shutout innings (4 H, 0 BB, 3 K), with a win and a save. He saved Cordemans' win over Australia to lock up a spot in the second round, striking out Allan de San Miguel to end it. Against Cuba, he relieved Leon Boyd with a 6-6 tie in the 9th. He struck out Alexei Bell, allowed singles to Yuli Gurriel and José Miguel Fernández to put runners on the corners but struck out Frederich Cepeda and got José Abreu on a fly. When Kalian Sams drove in Andruw Jones in the bottom of the inning, van Mil wound up the winner. In the semifinals, he relieved Boyd with a 4-1 deficit in the 8th against eventual champion Dominican Republic. He retired Hanley Ramírez, Nelson Cruz and Carlos Santana in order. For the Classic, only Boyd pitched more games for the Orange. He tied Fernando Cabrera for second in the 2013 WBC in games closed, behind only Fernando Rodney.

The summer was a rough one in terms of record though his ERA was not shabby; he was 0-9 with a 3.38 ERA and 8 saves in 48 games for the Pensacola Blue Wahoos and 0-1 with a 6.75 ERA in three games for the Louisville Bats. He tied Casey Medlen and Frank Batista for 5th in the Southern League in pitching appearances. Among Reds farmhands, he tied Chad Reineke for 7th in losses, tied Drew Hayes for third in games pitched and was 7th in saves. He signed with Japan's Rakuten Golden Eagles for 2014 and was 0-1 with a 4.15 ERA in 7 late-season games. In the Japanese minors, he was 1-4 with four saves and a 4.68 ERA. In his NPB debut, he relieved Yuri Furukawa with a 11-2 deficit and retired Yuji Onizaki, Hideto Asamura and Takeya Nakamura in order.

He returned to his native Netherlands for the 2015 Hoofdklasse, his first appearance back in the league in nine years. He pitched six shutout innings for Neptunus as they won the 2015 European Cup, saving Jorian van Acker's win over ASD Rimini then beating Unipol Bologna in game 2 of the finals when a loss would have eliminated his team. In the 2015 World Port Tournament, he had a 1.12 ERA in four outings for the Netherlands. He tied Yen-Ching Lu for third in the event in ERA and was second in games pitched, one behind Miguel Lahera. In the 2015 Hoofdklasse season, he went 2-1 with six saves and a 0.36 ERA in 19 games, allowing only six hits (.078 opponent average) and nine walks in 24 2/3 IP while striking out 31. He tied Kevin Geestman for second in saves, 3 behind Bayron Cornelisse. That earned him a return to the US with the Minnesota Twins' Rochester Red Wings, faring well in his limited time (4 1/3 IP, 1 H, 2 BB, 1 K, 0 R). He then shuttled back to Neptunus for the 2015 Holland Series, in which he allowed one run in 2 2/3 IP despite three hits and three walks. He saved Diegomar Markwell's game 3 win over Corendon Kinheim as Neptunus won the Series. His busy year continued with the 2015 Premier 12, with a 3.38 ERA and two saves; each time he saved wins for Shairon Martis, coming against Taiwan and Puerto Rico. He tied Brennan Bernardino, Fernando Nieve and Hyun-seung Lee for second in the event in saves, one behind Dustin Molleken. He winded down the long year with the Adelaide Bite in the Australian Baseball League, going 3-2 with 3 saves and a 3.97 ERA.

Van Mil opened 2016 back with Rochester but did not fare nearly as well (17 H, 6 BB, 15 R, 14 ER in 5 1/3 IP, 0-1) and was cut. He returned to Neptunus, where he was not as dominant as the prior year. He had a 5.40 ERA in the 2016 European Champions Cup, though he did get credit for a 5-4 win over T&A San Marino when Neptunus rallied in the bottom of the 10th to win. In the finale of the 2016 Haarlem Baseball Week, he saved the 2-0 win over Japan for Tom de Blok. In the 2016 Hoofdklasse campaign, he was 2-0 with 8 saves and a 1.69 ERA in 17 games, allowing 18 hits and 4 walks in 21 1/3 IP, striking out 29. He was second in saves (3 behind Sedley Karel). He saved Orlando Yntema's game 4 win in the 2016 Holland Series but lost game 5 to the Amsterdam Pirates then beat de Blok in game 6 to give Neptunus another title. He worked ten innings in five relief outings in the six-game Series, finishing second in the event in games pitched (one behind Berry van Driel) and third in strikeouts (only two behind Yntema and one behind Cordemans, both of them being starting pitchers).

In the 2016 European Championship, the tall right-hander was very effective, throwing seven innings of shutout ball, allowing only two hits and one walk while striking out eight. His five games pitched led the tournament, one ahead of Rhiner Cruz, de Blok, Andy Orfanakos and Andrés Pérez. He saved Martis's 1-0 win over Spain. In the Gold Medal game, also against Spain, he entered with a 2-2 tie in the bottom of the 8th and struck out three of six batters he faced, including former major leaguer Engel Beltre. He got the win when Dashenko Ricardo of the Netherlands scored in the bottom of the 10th on a Yurendell de Caster single. Back in the ABL that winter, going 0-2 with 8 saves and a 0.40 ERA (2 R, 1 ER in 22 1/3 IP), striking out 25 for Adelaide. He was second in the 2016-2017 ABL in saves (one behind Ryan Searle) and his 18 games pitched tied Searle for 4th.

Van Mil also pitched well in the 2017 World Baseball Classic, throwing five innings without an earned run (6 hits, 2 walks, 1 unearned run, 4 strikeouts). He closed out the first-round win over host South Korea by striking out Seok-min Park. Against Samurai Japan, he struggled in the 10th, allowing a single to Seiji Kobayashi and double to Seiichi Uchikawa but Tom Stuifbergen relieved to escape the jam. In the semifinals against Puerto Rico, he had a 1-2-3 10th despite a Francisco Lindor single as he got Carlos Correa to hit into a double play. In the 11th, though, with two on thanks to the Schiller Rule, Yadier Molina laid down a sacrifice bunt and Javier Báez was intentionally walked. Eddie Rosario hit a sacrifice fly to end it, saddling van Mil with a tough loss. In the tournament, he tied Dellin Betances, Pat Neshek and Joseph Colón for second in IP without an earned run, behind only Josh Zeid. He also tied for 9th with four games pitched; only Martis worked more for the Kingdom of the Netherlands.

He struggled in the 2017 World Port Tournament (2 IP, 6 H, 5 R, 3 ER, 0-2) and missed most of the 2017 Hoofdklasse season with a back injury. He did well when healthy with a 1.46 ERA in 8 games (14 K in 12 1/3 IP). He was in prime form for the 2017 Holland Series, again facing Amsterdam in the finale. In game one, he relieved Jan Tomek with two on, a 4-2 deficit and one out in the bottom of the 7th. He picked Nick Urbanus off third and retired everyone in the 8th and 9th for the win as Neptunus rallied. He saved Markwell's game 4 win, coming in with a 3-2 lead, two on and two out in the 8th; he struck out Sams in the clutch then went 1-2-3 in the 9th. He also got the win in game 5 to close the Series, replacing Yntema with a 4-2 deficit and one out in the 8th. After Neptunus scored four in the 9th, he allowed one in the bottom of the inning but retired Gilmer Lampe to end it with a 6-5 win. He led the Series in wins and had the lone save, tied Cordemans for 4th in ERA, was 5th in IP (8 1/3 IP) and was second in strikeouts despite being a reliever (9 K, 8 behind leader Cordemans). He was named Series MVP, the first reliever so honored since Dushan Ruzic in 2010.

In the high-scoring 2018 Super6, he was 1-0 with a 5.40 ERA for the champion Netherlands despite 7 hits in 3 1/3 IP. He got the win over rival Italy and Alex Bassani. He tied Ondřej Satoria, Enorbel Marquez, Daniel Thieben, Andre Hughes and Kevin Kelly for the most games pitched in the initial Super6.

On December 11, 2018, it was reported that he had suffered serious head injuries while hiking near Canberra, Australia. He sustained multiple fractures and bleeding in the brain after a fall and was listed in critical condition in hospital, having laid unconscious for 24 hours before being found by another hiker. He was with the Brisbane Bandits of the Australian Baseball League at the time and had just played a game against the Canberra Cavalry. He recovered fully and returned to practices in early January. He was 1-0 with 3 saves a 3.38 ERA in 7 games that year.

He announced his retirement from baseball in July 2019 (he had not played in the 2019 Hoofdklasse); less than a week later, he died in an accident.