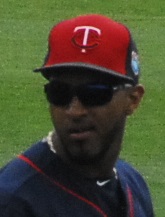 Eddie Rosario made his major league debut with the Minnesota Twins in 2015.

In 2011, Eddie excelled as center fielder for the Elizabethton Twins, batting .337/.397/.670 with 9 triples, 21 home runs, 17 steals (in 23 tries), 71 runs and 60 RBI in 67 games. He was among the Appalachian League leaders in average (4th), runs (1st by 13 over teammate Miguel Sano), hits (91, 2nd, one behind Brandon Drury), triples (1st, 2 ahead of Sano), OBP (9th), slugging (1st, 24 points ahead of Chase Davidson), OPS (2nd, .003 behind Davidson), home runs (1st, one ahead of Sano), RBI (2nd, one behind Art Charles) and steals (tied for 9th). Despite playing in a short-season league, he led the Twins chain in home runs. He joined Jamal Austin and Kevin Pillar in the league All-Star outfield and split Player of the Year honors with Drury. Baseball America named him as the 5th-best Appalachian League prospect, between Noah Syndergaard and Drew Vettleson (Sano and Drury went 1-2) and as the 3rd-best Twins prospect (behind Sano and Joe Benson). 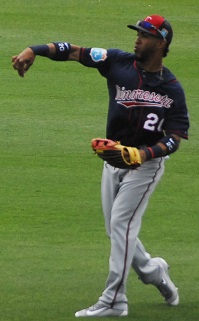 The Guayama native split 2012 between the Beloit Snappers (.296/.345/.490, 32 2B, 70 RBI in 95 G) and GCL Twins (7 for 19, 3 2B, HR) while playing mostly 2B. He was 6th in the Twins minor league system with 74 RBI and third in doubles (behind Chris Colabello and Oswaldo Arcia). He tied for 9th in the Midwest League in doubles. Baseball America ranked him as the 12th-best MWL prospect, between Justin Nicolino and Jorge Bonifacio.

Rosario then made the Puerto Rican national team for the 2013 World Baseball Classic.

Eddie started his major league career with a bang, as starting in right field for the Twins on May 6, 2015, he hit a home run off Scott Kazmir of the Oakland A's on the first pitch he saw. It was an auspicious debut, and he ended up claiming the LF starting job as he hit .267 with 18 doubles, 15 triples - most in the American League - and 13 homers in 122 games. He scored 60 runs and drove in 50. However, he struck out 118 times while drawing only 15 walks, resulting in a paltry .287 on-base percentage. On the defensive side, he led AL left fielders in assists, errors and double plays even though he played only 86 games at the position. It was a solid season overall and he received some down-ballot support in the voting for the 2015 American League Rookie of the Year Award.

Rosario had a career game for the Twins on June 13, 2017 as he went 4-for-5 with 3 homers, scored 3 runs and drove in 5. He batted ninth and played left field in the game, in which the Twins set a franchise record with 28 hits on their way to demolishing the Seattle Mariners, 20-7. The last of the homers came off back-up catcher Carlos Ruiz in the 8th inning. he hit .290 with 33 doubles and 27 homers in 151 games that season as one of the offensive leaders of a Twins teams that surprised everyone by making it to the postseason, losing the Wild Card Game to the New York Yankees. In his first postseason appearance in that game, he homered and drove in 2 runs in Minnesota's loss. In 2018, he played 138 games, hitting .288 with 24 homers and 77 RBIs, very similar production to his previous season. He then got off to a very hot start in 2019, with a 15-game stretch in April that included a .356 average and 20 RBIs. Part of this was a doubleheader against the Baltimore Orioles on April 20th in which he went 5-for-9 with three homers, a double and 4 RBIs to lead the Twins to a sweep. He hit ,276 in 136 games that year with career highs in homers (32) and RBIs (109) as the Twins won 100 games and set an all-time record for team home runs in a season. His OPS+ was 108 and he also scored 91 runs with that high-octane offense. However, the Twins only made a cameo appearance in the playoffs, being swept in three games by the New York Yankees in the Division Series. Eddie was 4 for 13 with a double and homer in that series, one of the few Twins batters to do much of anything against the Yankees' superior pitching.

In 2020, Eddie had another solid season for the Twins. In a season cut to 60 games by the Coronavirus pandemic, he played 57 games, and hit .257 with 13 homers and 42 RBIs, for an OPS+ of 117 as the Twins won another division title. But once again, it was followed by a quick postseason exit, this time a two-game sweep by the Houston Astros in the Wild Card Series. This time, he wasn't able to contribute anything as he was shut out in his 7 at-bats. Following the season he became a free agent and on February 4, 2021, he signed with the Cleveland Indians.However, counted on to provide offense, he was a disappointment on a team that failed to hit much. In 78 games, he batted .254 with 7 homers and 46 RBIs, translating to an OPS+ of 84, which would have been the lowest in his career over a full season. He was then injured on July 1st, with an abdominal strain. As the Indians were being distanced significantly by the Chicago White Sox in the divisional race, they decided to trade some expensive older players at the deadline, and Eddie was one of these, being sent to the Atlanta Braves on July 30th in return for the Kung-Fu Panda himself, Pablo Sandoval. The Braves had been making do with a makeshift outfield since the season-ending injury to Ronald Acuna at the beginning of the month, and as a result acquired four veteran outfielders in a span of two weeks: Rosario, Joc Pederson, Jorge Soler and Adam Duvall. He was still on the injured list at that point, but about to return. The Braves' series of trades paid quick dividends, as they took over first place in the NL East in short order. On September 19th, he hit for the cycle in a 3-0 win over the San Francisco Giants, barely a month after teammate Freddie Freeman had accomplished the feat on August 18th. Incredibly, he was the first Puerto Rican player in history to hit for the cycle, and he needed only five pitches to collect the four hits.