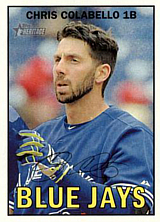 Chris Colabello reached the big leagues after starring in independent ball for seven years. Following a strong 2015, a PED suspension killed his career.

Chris's father, Lou, played for Italy in the 1984 Olympics; an American, Lou met Chris's mother while playing in Serie A. Chris spent his early childhood moving between the two countries. He played for Assumption College, hitting .361 in 2003 and .380 in 2004, then signed with the Worcester Tornadoes of the Can-Am League, with whom he would spend significant time.

After toiling in baseball's hinterlands for 7 years, Chris finally got a real chance in organized ball, signing with the Minnesota Twins in February 2012 out of a tryout camp. He had hit .317 with 166 doubles, 86 home runs and 420 RBI in 583 Can-Am games to that point. His first summer was a good one, as he batted .284/.358/.478 for the New Britain Rock Cats, with 37 doubles, 19 home runs, 98 RBI and a .996 fielding percentage. He led the Eastern League in doubles (2 ahead of Leandro Castro and Robbie Widlansky), was fourth in runs scored (78), tied for fourth in home runs and was second in RBI (6 behind Darin Ruf). Among Twins farmhands, he led in doubles (one ahead of Oswaldo Arcia) and tied Arcia for second in RBI (two behind Miguel Sano). He also tied for second in home runs. He was named the EL All-Star DH (Ruf was picked at first base) and was runner-up to Ruf in MVP voting. Colabello then followed in his father's footsteps, playing on the Italian national team for the 2012 European Championship. As Italy's cleanup hitter and first baseman, he hit .355/.444/.516 with 8 runs scored and 10 RBI in 8 games. In the 8-3 win over the Dutch national team in the Gold Medal game, he went 1-for-4 and singled in Lorenzo Avagnina while facing Shairon Martis. He starred for Italy in the 2013 WBC, going 6 for 18 with 2 home runs and 7 RBI in 5 games. He led the Azzurri in RBI, one more than Anthony Rizzo, and had two-thirds of their homers (Drew Butera had the other). Hitting 5th and playing DH, he had two three-run homers, off Scott Mathieson in an upset win over Team Canada and off Edinson Volquez in a near-upset 5-4 loss to the Dominican national team (the eventual champions). He finished among the Classic leaders in home runs (tied for third, one behind José Dariel Abreu and Alfredo Despaigne) and RBI (tied for 5th with Shinnosuke Abe, Yoshio Itoi and Michael Saunders, trailing David Wright, Abreu, Mike Aviles and Despaigne). He did not make the All-Tournament team as Hirokazu Ibata was picked at DH.

Colabello began 2013 hot with the Rochester Red Wings, hitting .358/.417/.659 with 17 doubles, 12 home runs and 39 RBI in 46 games. He was leading the International League in homers, was second in doubles (two behind Joey Terdoslavich) and was second in RBI (behind Luis Jimenez). On May 22, the Twins called Colabello up when Trevor Plouffe was placed on the 7-day concussion DL, and Chris debuted the same day against the Atlanta Braves. It was a scramble to make it to the game, as the team bus he was on was involved in an accident as he was heading back to Rochester from Allentown, PA in the early hours of the morning. No one was injured, but he just managed to reach Atlanta in time for the game, where he found himself starting in right field and hitting 6th. He went 0-for-4 that day, being robbed of a base hit by Braves right fielder Jason Heyward in his first at bat, as the Twins lost 8-3, but it was the culmination of a long and circuitous trip for Chris. He got his first hit off Doug Fister and his first homer against Yoervis Medina in the 13th inning for a winning blow on July 26th. He finished his Rochester campaign at .352/.427/.639 with 24 homers and 76 RBI in 89 games, leading the IL in average (36 points over Jeff Kobernus), slugging (118 points over Mauro Gomez), OBP (.019 over Vince Belnome) and OPS (212 ahead of Belnome). Despite his significant time in the majors, he was 6th in the IL in homers and tied Nick Castellanos for fourth in RBI. He was an easy choice as IL MVP. He ended up playing 55 games for the Twins, hitting .194/.287/.344 with 7 homers and 17 RBI, splitting his time between first base, DH and right field.

Chris had a career day on April 3, 2014, when he drove in 6 runs in a 10-9 win against the Chicago White Sox; both of his hits were doubles, one with the bases loaded and the other with two men on, and he also drove in a run with a ground out. He followed with a 4 RBI day against the Cleveland Indians in a 10-7 win on April 6th to take the early lead in the category in the AL. He was still leading the circuit in RBI on April 23rd when he had another great day, driving in 4 runs, including the game-winner, in a 12-inning, 6-4 win over the Tampa Bay Rays. His 26 RBI in April tied a club record set by Hall of Famer Kirby Puckett in 1994, and he still had 6 games left to add to it. He set a new record with his 27th ribbie on April 25th, which is where he finished the month. Midnight did not take long to strike for the Cinderella player, as on May 25th, the Twins announced that he was being demoted to AAA, the result of having gone hitless in his last 23 at-bats; his average was down to .232 after peaking at .359, he had collected only 3 RBI in May and he had lost his starting job at first base. He ended up playing 59 games for Minnesota that year, with a .229 average, 6 homers and 39 RBI. In the minors, he hit .268 with 13 doubles, 10 homers and 38 RBI in 61 games for Rochester. The Twins placed him on waivers after the season and he was claimed by the Toronto Blue Jays on December 8th.

With Toronto in 2015, Colabello was seen simply as insurance in case one of its top-line players was lost to injury. He was assigned to the AAA Buffalo Bisons to start the year, where he hit .337 with 5 homers in his first 23 games and was named the International League Player of the Month for April. He got the call to Toronto because of injuries to outfielders Michael Saunders and Jose Bautista, the latter preventing the Jays' superstar from playing the field although he could still play DH. Colabello joined the team on May 5th and immediately began to contribute, going 7-for-12 with a homer in his first three games. On May 20th, he began a hitting streak that reached 17 games on June 7th. That day, he won a game against the Houston Astros, completing a three-game sweep, with a two-run single off Luke Gregerson in the 9th that gave Toronto a 7-6 win. His average was up to .355 with 19 RBI in 31 games. In his next game, his hit came in the 1st inning, part of a six-run outburst that led the suddenly hot Blue Jays to an 11-3 win over the Miami Marlins. The streak ended at 18 games when he went 0-for-3 on June 9th. On June 24th, he homered off Brandon Gomes in the 12th inning to give the Jays a 1-0 win. He ended up playing 101 games for Toronto, hitting .321 with 19 doubles, 15 homers and 54 RBI, fitting right in with their lineup of hard hitters. His OPS+ was an excellent 141, and he filled in at first base and in the outfield. He also hit a pair of postseason homers, one each in the Division Series and the ALCS.

On April 22, 2016, Chris was handed an 80-game suspension for testing positive for a banned PED, dehydrochlormethyltestosterone. Because of a change of rules, the suspension also meant that he would be ineligible for any postseason play. He began a rehab assignment with the Class A Dunedin Blue Jays on July 13th, with a planned return to Toronto on July 23rd. That day, he was not added to the major league roster, instead sent to AAA. He never made it back to the majors.