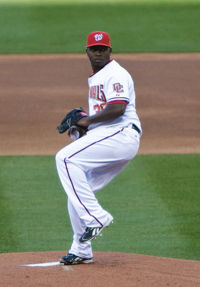 Shairon Martis is a pitcher who made his debut with the Washington Nationals in 2008 and played three major league seasons. He also pitched for the Dutch national team.

Martis had trained with the Dutch team in the past but was added to their roster for the first time prior to the 2006 World Baseball Classic. He was the youngest member of the squad, but did the best. He got the start in their third game, against a Panamanian national team that was fresh off a Bronze Medal at the 2005 Baseball World Cup and included four major leaguers in the starting lineup. The Netherlands was in desperate hope for a win after a 0-2 start. Martis walked Olmedo Saenz and allowed no hits in 7 innings when the game was called due to the mercy rule as the Netherlands led, 10-0. Martis used just 65 pitches and amazingly did not strike out a batter in the gem. In the 7th, Adolfo Rivera reached on a shot off of 3B Ivanon Coffie's glove; it was ruled an error. Martis retired Saenz then got pinch-hitter Cesar Quintero to ground to Coffie, who started the game-ending double play. Martis had gone down in the history books with the first shutout and first no-hitter in World Baseball Classic history.

Martis had a somewhat productive year in 2007, with a 14-8, 4.23 record for Potomac. He was one win behind Carolina League leader Rowdy Hardy and led Washington's minor leaguers in wins and innings pitched (151). He was back with the Netherlands for the 2007 European Championship. He allowed 2 hits and no walks in 6 shutout innings against the Czech team, fanning 8, before Duko Jansen closed the win. Against Spain, the Silver Medal winner, he allowed 3 runs (1 earned) and struck out 7 in 5 innings, getting outdueled by Manny Olivera; the Netherlands rallied to win against the Spanish bullpen. Martis was 1-0 with a 0.82 ERA in the event, posting an ERA slightly better than the Netherlands team total of 0.87. Thanks to their Gold Medal, they clinched a spot in the 2008 Olympics. Martis did not remain with the Dutch squad for the 2007 Baseball World Cup.

Martis was back with the Netherlands for the 2008 Olympics and went 0-2 with a 6.75 ERA, taking losses against Team USA and Team Canada. He did outpitch the team's other hurler to start two games, Alexander Smit. He was called up top the National League a few weeks after the Olympics ended but lost his major league debut on September 4, 2008, giving up two runs in five innings against the Atlanta Braves.