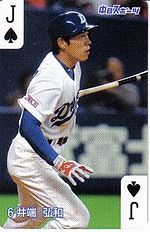 Hirokazu Ibata is the shortstop for the Chunichi Dragons.

Ibata became an everyday shortstop in 2001 with Fukudome switching positions. He hit .262/.326/.330 for Chunichi. He was with Japan for the 2001 Baseball World Cup and batted .438/.561/.531 with 11 runs in 10 games; he stole successfully in all eight attempts. He led a strong team (which included Yoshinobu Takahashi, Shinnosuke Abe and Tadahito Iguchi) in runs. He was third in the Cup in average behind Luis Ulacia and Jenry Roa and tied Ralph Milliard for the most steals. He made the All-Tournament team at shortstop.

Ibata produced at a .267/.319/.342 rate in 2003 and Masahiko Morino saw some action at short as the Dragons sought more offense there. He was on Japan's squad for the 2003 Asian Championship as they won Gold. In 2004, Ibata again was the everyday option and hit .302/.367/.395 with 81 runs, 30 doubles and 21 stolen bases (in 31 tries) in a big step forward. He was third in the CL in steals behind Norihiro Akahoshi and Masahiro Araki and 4th in doubles. He won a Gold Glove at shortstop and made the Best Nine again.

In the 2007 Asia Series, Ibata won MVP honors as he led Chunichi to victory. He had the tourney-winning single in the 9th inning of the finale against Mike Romano of the SK Wyverns. He was 0 for 4 with a hit by pitch, steal and a run in the 2007 Asian Championship as Japan clinched a spot in the 2008 Olympics.