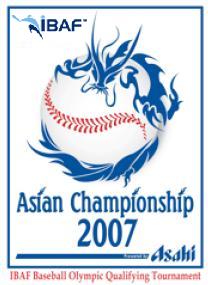 The 2007 Asian Championship was a qualifying tournament for the 2008 Olympics held in Taiwan from November 27 through December 3, 2007. The winning team, Japan secured an Olympic bid. The second- and third- place teams, South Korea and Taiwan advanced to the final Olympic qualifier. Shinnosuke Abe of Japan is named MVP.

The Pool B matches determine which will be the fourth team in the final round, joining Japan, South Korea and Taiwan. The Thai national team was coming off of its first Baseball World Cup appearance, while the Philippines had played in the BWC a few times in the past.

The favorites were Japan, fresh off of a Bronze Medal in the 2007 Baseball World Cup but with a much better team for this event. South Korea had finished 5th in the World Cup with their B-team and brought their A-team here; a win by the team would not be a surprise. Taiwan had also played in the Olympics in the past. Despite sending their A-team, they only finished 8th in the World Cup. They had home field advantage at least. The Philippines were considered an unlikely contender.