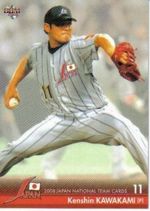 Kenshin Kawakami was the 2004 Sawamura Award winner. He made his Major League debut with the Atlanta Braves in 2009.

In the 1997 Intercontinental Cup, Kawakami allowed 6 runs in 7 innings as Japan's worst hurler; they would stun the Cuban national team to win a Gold Medal. It was Cuba's first Gold Medal game loss in 15 years. He was the first-round draft pick of the Chunichi Dragons in 1998. He immediately proved the choice to be a good one, as he won Rookie of the Year honors that season by going 14-6 with a 2.57 ERA. He was fourth in the Central League in wins and second in ERA, trailing only teammate Shigeki Noguchi.

In May 2006, Kawakami was named pitcher of the month for the seventh time in his career. That tied Masahiro Yamamoto and Hideki Matsui for the most times being named the top player or pitcher in their league for a month. Kawakami was 17-7 with a 2.51 ERA in 2006 and struck out 194 while walking just 39 and allowing 166 hits in 215 IP. He tied Igawa for the CL strikeout lead, led in wins and was third in ERA behind Hiroki Kuroda and Shinobu Fukuhara. His three shutouts tied Igawa and Daisuke Miura for the lead and he was second to Miura in innings pitched. He allowed two runs in 8 innings in Game 1 of the 2006 Japan Series for a win; it was Chunichi's only win of the Series. In Game 5, Kawakami took the loss against his Game 1 opponent, Yu Darvish. Kawakami earned Best Nine honors as the top pitcher in the Central League, but lost the Sawamura Award to Kazumi Saitoh.

After the season, Kawakami signed a 340-million yen deal, surpassing Koji Uehara as the highest-paid pitcher in Japan.

Kawakami fell to 12-8, 3.55 in 2007. He was 8th in the CL in ERA, tied for 5th in wins and 7th with 145 strikeouts. He won a Gold Glove. In the 2007 Japan Series, he again started Game 1 against Darvish and retired 21 consecutive batters at one point but took the loss thanks to a three-run 1st-inning homer by Fernando Seguignol and a sensational game from Darvish. Kawakami was widely expected to start Game 5 but manager Hiromitsu Ochiai opted for Daisuke Yamai, a pitcher of far lower pedigree. Yamai teamed with closer Hitoki Iwase on the first perfect game in Japan Series history to give Chunichi its first title in over 50 years.

Kawakami pitched two scoreless innings in the 2007 Asian Championship, getting a win in relief in Game 2 against the South Korean national team as Japan won the title and clinched a slot in the 2008 Olympics. Kawakami won a record 8th Pitcher of the Month Award in June of 2008, when he was 3-0 with a 1.05 ERA. In five relief appearances in the 2008 Olympics, Kawakami had a 4.70 ERA. His only decision was a loss in the Bronze Medal game. He entered with a 4-4 tie but allowed a two-run double to Taylor Teagarden followed by a two-run homer to Jason Donald to cost Japan their shot at a Medal. He had a good season in 2008, going 9-5 with a 2.30 ERA and 1.06 WHIP. He tied Masanori Ishikawa for 5th in the Central League in strikeouts and would have beaten Ishikawa out for the ERA title had he pitched enough innings to qualify. He had missed three weeks with a back injury.

A free agent following 2008, Kawakami signed a three-year deal with the Atlanta Braves for 2009, joining Derek Lowe as free agent signees trying to fill the loss of John Smoltz on the staff. He made his debut with his new team on April 11th, giving up three runs in six innings in a winning start against the Washington Nationals. However his season was a disappointment overall, as he ended up with a record of 7-12 and a 3.86 ERA. His 2010 season was a complete disaster, as he was 1-10 with a 5.15 ERA in 18 games. He then spent 2011 in the minor leagues, but had terrible results, with a 2-4, 8.41 mark in 16 games for the Gwinnett Braves of the International League. He was let go after the season.