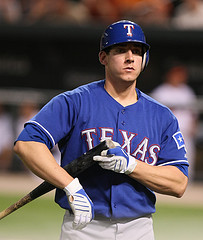 Catcher Taylor Teagarden was a member of the US Olympic team in 2008 and also made his Major League debut that year.

Teagarden hit .398 as a high school sophomore and improved to .400 as a junior. In his senior year, he batted .407 and was named to the Texas State All-Star team. He was taken by the Chicago Cubs in the 22nd round of the 2002 amateur draft but opted for college.

Taylor went on to the University of Texas and impressed from the get-go. He hit .315/.380/.485 as a freshman and was named the Big Twelve Conference Freshman of the Year despite having to share a position with Curtis Thigpen. Collegiate Baseball named him a Freshman All-American; Baseball America chose him second-team behind Jeff Clement. He participated in Team USA's national trials but Clement and Mike Nickeas were picked as the backstops instead.

In 2004, Teagarden and Thigpen switched off between catcher and first base. Taylor led the #2 team in the nation with 10 home runs and tied Thigpen and Seth Johnston for the lead with 51 RBI. He hit .273/.393/.462 for the year. This time, he made Team USA. He batted .309 that summer with them, sharing catching duties with Clement. He hit .360 in the 2004 World University Championship, helping the US win Gold in the event.

With Thigpen having been drafted in 2004, Teagarden became the full-time Texas backstop in 2005. He responded by batting .333/.441/.536 and tying Alex Gordon and Daniel Bruce for the Big 12 lead with 22 doubles. He made the All-Conference team at catcher. He then helped the Longhorns win the 2005 College World Series, making the All-Tournament Team as the catcher.

The Texas Rangers and scout Randy Taylor signed Teagarden as the third round pick in the 2005 amateur draft, the 99th overall pick and the 8th catcher chosen. One of the catchers picked ahead of him would also play in the 2008 Olympics in Chris Robinson, Canadian chosen by Detroit with the 90th selection.

Teagarden was initially assigned to the Spokane Indians. After a 1 for 20 start, he hit .342 the remainder of the year and finished with a batting line of .281/.426/.635 with 16 of his 27 hits going for extra bases. He helped Spokane to a Northwest League title. Baseball America ranked him as the NWL's #3 prospect behind Shane Lindsay and Donald Veal.

Teagarden had both Tommy John surgery and back surgery following the 2005 season, limiting him to a brief rehab stint in 2006. He was 1 for 20, albeit with 9 walks, for the AZL Rangers.

In 2007, Teagarden returned to action and was clearly healthy, though he was limited to 44 games at catcher, playing a lot of DH to prevent strain. He hit .315/.448/.606 with 25 doubles, 20 home runs, 65 walks, 75 runs and 67 RBI in 81 games for the Bakersfield Blaze. Against southpaws, he hit .397. He was promoted to the Frisco RoughRiders and batted .294/.357/.529 in 29 outings there. Overall, he had 94 runs, 27 home runs, 75 walks and 83 RBI. Baseball America rated him the #13 prospect in the California League, between Wade LeBlanc and Eric Young Jr. Had he qualified, he would have been 7th in the California League in batting average and 8 points behind Aaron Bates for the OBP lead. He hit .271 for the Surprise Rafters in the Arizona Fall League; Baseball America rated him as the #10 prospect in the AFL, right after Dexter Fowler.

Teagarden struggled in the first half of 2008. He hit .169/.279/.305 in 16 games for Frisco and .238/.352/.409 in his first 49 for the Oklahoma RedHawks. He still made the US roster for the 2008 Futures Game. He replaced Lou Marson at catcher and drew a walk from Julio Pimentel in his lone plate appearance before being replaced by Bryan Anderson. Teagarden did throw out both runners who tried to steal on him - Pablo Sandoval and Iván DeJesús Jr. He was then placed on the US roster for the 2008 Olympics. Before he could make the trip to Beijing, he was called up by the Rangers, making his Major League debut on July 18, going 0 for 3 as the Rangers' starting catcher. Teagarden's first hit was a solo homer on July 20 - it broke up a perfect game by Scott Baker in the 6th and was the lone run in a 1-0 Rangers victory.

In the 2008 Olympics, he hit .188/.388/.313 while splitting time with Marson; one downside was 8 strikeouts in 16 at-bats. He did throw out 3 of 4 attempted base-stealers to help the USA win Bronze. His 2-run double against Kenshin Kawakami was the key blow in the USA's Bronze Medal game win over the Japanese national team.

After the 2015 season, Teagarden was featured in a controversial documentary broadcast on Al-Jazeera America that claimed PED use by a number of prominent athletes. On April 1, 2016, he was issued an 80-game suspension by Major League Baseball. He was a free agent at the time, having last played briefly in the majors with the Chicago Cubs the previous season.