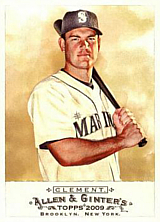 Once counted among the top prospects in the game, Jeff Clement's big league dreams died hard, playing parts of four seasons in The Show.

Born in Marshalltown, IA, the birth place of Hall of Famer Cap Anson, Jeff led the town to the 1996 Little League World Series. He broke the national high school home run record by belting 75 bombs in those schoolboy days, moving on up to the USC Trojans and winning the Johnny Bench Award as the nation's top catcher in his junior season. He played on the US team that won the Silver Medal at the 2003 Pan American Games and was selected by the Seattle Mariners in the first round of the 2005 amateur draft, third overall behind future All-Stars Justin Upton and Alex Gordon. He was signed by scout Greg Whitworth and made his debut that summer, splitting the year between the Everett AquaSox and the Wisconsin Timber Rattlers. He spent the 2006 season playing for the San Antonio Missions and the Tacoma Rainiers.