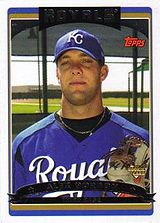 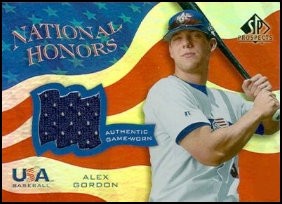 The second pick in the 2005 amateur draft, third baseman Alex Gordon was signed by scout Phil Huttmann to a reported $4 million bonus with the Kansas City Royals and made his professional debut in 2006. In 130 games with the Wichita Wranglers, he hit .325 with 29 homers and 101 RBIs and was named Minor League Player of the Year by Baseball America. He finished fourth in the minors in slugging (.588) and OPS (1016). Baseball America also rated him as the best defensive third baseman in the Texas League that year.

Gordon played third base for the University of Nebraska Cornhuskers and was the 2005 winner of the Golden Spikes Award as the top player in College Baseball.

He made his MLB debut with the Kansas City Royals on April 2, 2007 as the starting third baseman in the club's opening day win over the Boston Red Sox. After two horrendous months to start the season, Gordon finally got on track in June. He was named the team's Player of the Month for June. He won the award again in September.

Gordon suffered through two very poor seasons in 2009 and 2010 before having his best season in 2011, hitting .303 in 155 games, with 23 homers 101 runs scored. That year, Gordon broke the Royals franchise record by recording his 18th outfield assist. The previous record of 17 was held by Mark Teahen and Jermaine Dye; he finished the year with 20. He was rewarded for that excellent season by winning a Gold Glove, and then on March 30, 2012, by signing a four-year contract with the Royals worth $37.5 million.

He confirmed that the 2011 season was no fluke by putting together three solid seasons in a row from 2012 to 2014. He made his first All-Star team in 2013, and repeated the next year, while winning the Gold Glove in left field all three years. A model of consistency, he played between 156 and 161 games each year. he led the American League with 51 doubles in 2012, had 20 homers and 81 RBIs in 2013, and followed that with a season of 19 homers and 74 RBIs when the Royals broke a twenty-year postseason drought in 2014. He scored between 87 and 93 runs each year. In the 2014 postseason, after going 0-for-5 in the Wild Card Game, he hit .300 in a three-game sweep of the Los Angeles Angels of Anaheim in the Division Series, then went 3 for 12 with a double and a homer in another sweep, this time over the Baltimore Orioles, in the ALCS. He was 5 for 27 with 3 doubles and 4 runs scored as the Royals lost the 2014 World Series in 7 games to the San Francisco Giants. He almost managed to tie the decisive Game 7 on October 29th, when he singled off Madison Bumgarner with two outs and the Royals down, 3-2, in the bottom of the 9th; the ball got away from LF Gregor Blanco and went all the way to the wall, as Gordon raced to third base. Fans will speculate for years to come on whether he would have made it safely had he tried to make it all the way home. He was left stranded on third base as Santiago Perez popped out to end a thrilling World Series.

Gordon became a household name thanks to his postseason exposure, and he began the 2015 season playing as well as ever, with the Royals quickly establishing themselves in first place in the AL Central race. He was voted a starter in the 2015 All-Star Game, but a couple of days later, on July 8th, he suffered a serious injury as he tore a hamstring while trying to chase what turned out to be an inside-the-park homer by Logan Forsythe of the Tampa Bay Rays. he had to be carted off the field and was immediately placed on the disabled list, forcing him to miss the Midsummer Classic. He was hitting .279 with 11 homers, 32 runs scored and 39 RBIs in 78 games at the time of the injury. He made it back to the field on September 1st and played regularly again in the season's final month to finish at .271 with 13 homers and 48 RBIs in 104 games. He then started every game of the Royals' run to a first World Series title in 30 years in left field, collecting 13 hits, including 4 doubles and 2 homers, scoring 10 runs and driving in 6 in 16 games. The Royals defeated the New York Mets in five games in the Fall Classic. He became a free agent after the season, and after listening to various offers, opted on January 6, 2016 to re-sign with the Royals for four years for $72 million.

On May 22, 2016, Gordon and 3B Mike Moustakas crashed into each other while running down a foul ball and Gordon fractured his right wrist, putting him on the disabled list, likely putting him out for a month. He was hitting only .211 with 4 homers and 10 RBIs in 42 games at the time. For his part, Moustakas suffered a season-ending injury on the play. He was limited to 128 games as a result, hitting a disappointing .220 with 17 homers and 40 RBIs. In 2017, he never really got his bat going after an awful start. He hit just .184 in April and .164 in May, without a single homer over the first two months. He hit slightly better over the next months, but it was just enough to keep his batting average on the right side of the Mendoza Line. A rare highlight came on September 19th, when his homer off Ryan Tepera of the Toronto Blue Jays was # 5,964 hit in the majors that year, setting a new all-time record for most homers with over 300 games still to play. It was just his 8th long ball of the year, as he was headed to his lowest total since 2010. He finished the year at .208 with 9 homers and 45 RBIs, with an OPS+ of just 63.

After his awful 2017 season, many expected Gordon to retire or be released, but the Royals decided to keep him around as one of a small number of veterans still with the team in the midst of a complete rebuild. It did bounce back to some extent in 2018, as he hit .245 with 13 homers and 54 RBIs in 141 games. His OPS+ improved to 90, still below average, but no longer as embarrassing as that of the previous year. He continued the bounceback trend in 2019, when he hit .266 with 13 homers and 76 RBIs in 150 games, the RBI total being his highest since 2013. His OPS+ also hit a high-water mark compared to recent years at 95, his best since 2015. However, this came while the Royals were non-competitive and it was clear that he would not be part of any future in which they were competitive again. In the shortened 2020 season, he fell back to the levels of his dreadful 2017 season, and on September 24th, just before the final week-end of games, he announced that he would retire at the end of the year. He ended his career with 7 Gold Gloves in the outfield, and his 110 assists since 2010 were the most by any outfielder over that time span.

His younger brother Derek Gordon pitched in the independent leagues in 2014 and was signed to a minor league contract by the Royals in 2015, while another brother, Brett (named after George Brett) played outfield in college. His cousin, Jacob Kuebler, was drafted in the 2008 amateur draft.