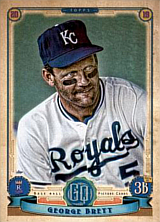 "I love George Brett. George is everything that's right about baseball." - Charlie Lau

"He was always the guy. He was the clutch guy... he was so mentally tough and he accepted being that guy." - Denny Matthews

Brett graduated from El Segundo High School and was a second-round draft pick in 1971. He followed his brother, Ken, who had been a first-round pick five years earlier in 1966. Ken was already in his fourth year in the majors when George was drafted.

George played in the minors from 1971 to 1973 and made his major league debut in August 1973. In early 1974, he was back in the minors but soon became the regular third baseman for the Royals. In his four years in the minors, he never hit .300 nor did he slug over .420. The regular third baseman in 1973 when George made his debut was Paul Schaal, who was having a good year with the bat. Schaal, at the time a 30-year-old veteran of ten major league seasons, hit .288 for the 1973 season (with a .389 OBP) and fielded decently. George, in his 13 games in the majors in 1973, hit .125. Despite that performance, on April 30, 1974, the Royals traded Schaal to the California Angels, where he finished his career. Brett, on the other hand, appeared in 133 games with the Royals as a rookie. While George hit .282, his OBP was only .313 and his slugging percentage a modest .363 (with both numbers under the league average). His fielding numbers looked pretty good and he placed third in Rookie of the Year voting.

George began to blossom in 1975. That year, he led the league in hits, triples and at bats, batted over .300 and was 11th in the MVP vote. In 1976, he really hit his stride. Leading the league again in hits, triples and at bats, he also won his first batting title with a .333 average in a close contest - teammate Hal McRae hit .332 and Rod Carew hit .331; the race was only decided on the last day of the season and not without controversy. George finished second in MVP voting and was named to his first of 13 straight All-Star teams. 1977 marked George's emergence as a slugger. He hit 22 home runs, slugging .532 without giving up his ability to hit singles, doubles and triples. In 1978, his batting average dipped under .300 and his slugging percentage dipped under .500, but he led the league in doubles for the first time with 45. He also had perhaps his best year as a base-stealer, swiping 23 bags and getting caught only 7 times. In 1979, he again led the league in hits and triples, something he would not do again in his career.

1980 was his monster year, as he posted an Adjusted OPS of 203, the only time between 1962 and 1992 that an American Leaguer had an Adjusted OPS over 200. He was the MVP and led the league in batting average, OBP and SLG. To top it off, he slugged .667 in the 1980 World Series. He had a 30-game hitting streak that season, a Royals franchise record until broken by Whit Merrifield in 2019. For the most part, George continued to play at a high level of ability throughout the 1980s. Although he led the league in few important individual numerical hitting categories from 1981 to 1989, he was twice the league Adjusted OPS+ champ and twice the slugging champ. He was second in the 1985 American League MVP vote and won his only Gold Glove that year. He almost literally carried the Royals on his shoulders in the 1985 ALCS, hitting .348/.500/.826 in a difficult seven-game win over the favored Toronto Blue Jays. In the 1985 World Series, Brett hit .370 for the first Royals world championship squad.

One might have thought by age 37 that George was past his prime, but he was to have one more top year, leading the league in 1990 with a .329 batting average and 45 doubles, becoming the only man to win batting titles in three decades in the process. His 1991-1993 seasons were notably less strong, and unfortunately for George, his decline came just as expansion and other factors juiced up hitting for younger players in 1993. That year was George's last major league season, at age 40, one in which he still had over 600 at-bats.

George Brett is forever linked with Robin Yount. Among the coincidences in their careers:

Brett is famous as the victim of the "pine tar" incident on July 24, 1983, where New York Yankees manager Billy Martin convinced umpire Tim McClelland to disallow a home run by Brett on the grounds that Brett had rubbed pine tar on the bat beyond the allowed height and to call him out. When he learned of the decision, Brett completely lost his temper, running onto the field like a madman and being eventually ejected. After the Royals filed a protest, the decision was reversed by American League President Lee MacPhail, who allowed the home run to stand and forced the two teams to replay the game's last few outs. 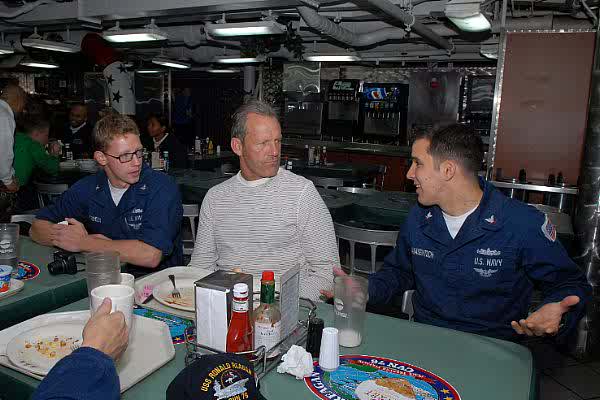 Brett speaks with Navy sailors in 2009.

"What do you do - buy a condo each time?" - Don Slaught, a teammate of Brett's, on hearing about Brett's regular six-figure paycheck.

George Brett was elected to the Baseball Hall of Fame on January 5, 1999 by the Baseball Writers Association of America. He was close to a unanimous pick, getting around 98% of the vote.

He is the only player ever to hit three home runs against the same pitcher in one postseason game. On October 6, 1978, in the ALCS, he hit three against Catfish Hunter.

He homered 10 times or more against these Hall of Famers: Dennis Eckersley, Catfish Hunter, Ferguson Jenkins, Jim Palmer, Gaylord Perry and Don Sutton. His lifetime batting average against Hall of Fame pitching was .299, and his slugging percentage was .434.

He is the brother of Ken Brett, a pitcher who played 14 years in the major leagues and appeared in the 1967 World Series at the age of 18. He faced his brother 20 times in his career, getting 6 hits, 2 doubles and an RBI. The two were briefly teammates in 1980 and 1981. His other brothers, Bobby and J.B. Brett, bought the Spokane Indians along with Ken and George. They also purchased the Spokane Chiefs major junior hockey team, the Tri-City Dust Devils, and the High Desert Mavericks. His nephew, Beau, was drafted in the 2008 amateur draft.

George is credited with coining the term "The Mendoza Line", in reference to slick-fielding, weak-hitting Mario Mendoza. He coined the term in an interview with Chris Berman of ESPN; the term eventually became commonly used to refer to any batting average under .200 (despite being associated with under .200 futility, Mendoza was actually a career .215 hitter).

Brett became a Vice President for the Royals after his retirement form the field. On May 30, 2013, he was named the team's interim hitting coach, replacing Jack Maloof, with the team struggling badly at the plate after finally making a push for contention in the offseason. Commentators remarked that even at age 60, Brett looked fit enough to still play in the majors - and to likely out-hit many of his charges. He stepped down on July 25th, in favor of assistant hitting coach Pedro Grifol, explaining that he felt he had done what had been expected of him as the team was now hitting much better than when he had taken over.

He wore number 5, a number which has since been retired by the Royals in his honor. In 1994, he was inducted into the Royals Hall of Fame.

A photo of George in a 1976 edition of National Geographic served as the inspiration for the gargantuan hit single "Royals" by Lorde, winner of Song Of The Year at the 2014 Grammys.

He has made appearances on the sitcom Modern Family, IFC comedy Brockmire, and Fantasy Island (with his brother Ken), among other programming.

A video in which George discusses crapping his pants was uploaded to YouTube sometime in 2010 and has over 500,000 views to date.