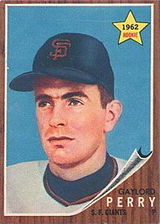 A two-time Cy Young Award winner, Gaylord Perry won the award in 1972 with the Cleveland Indians and again in 1978 with the San Diego Padres in the span of a career in which he won more than 300 games. As such, he was the first man to win the award in both leagues. His brother Jim Perry also won a Cy Young Award for the Minnesota Twins in 1970, making the Perry brothers the only set of brothers to both win Cy Young Awards. He also has a nephew, Chris Perry, who is a professional golfer.

Perry was famous for a series of motions where he would touch his face to make the batter think he was loading up a spitball. Perry was long believed to have doctored the baseball but was only caught once, on August 23, 1982, in his 21st season. When Gaylord's daughter Alison was five years old, a reporter asked her if her daddy threw a greaseball. "It's a hard slider," she replied, without missing a beat. 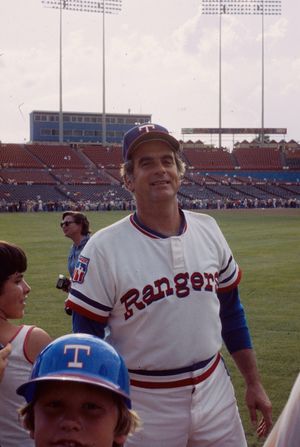 Perry began his career with the San Francisco Giants and had a measure of success there, although overshadowed by Juan Marichal, who was dominant in the 1960s, and Mike McCormick, who won a Cy Young Award when the two were teammates. He did make the All-Star team twice, in 1966, when he went 21-8, and 1970, when he was 23-13. After the 1971 season, when he went 16-12, 2.76 in the regular season and 1-1 facing the Pittsburgh Pirates in the NLCS in the only taste of postseason play of his career, he was traded to the Cleveland Indians along with infielder Frank Duffy for fireballer Sam McDowell. It was assumed at the time that the Giants had won the deal, as McDowell had tremendous stuff and was younger. However, it turned out that McDowell only had a couple of decent seasons left in his arm but Perry was just entering his prime. He had great seasons for the Indians in 1972, when he won his first Cy Young Award thanks to a record of 24-16, 1.92 with a terrible team, 1973 (19-19, 3.38) and 1974 (21-13, 2.51) when he started the All-Star Game and teamed up with his brother Jim who went 17-12. 15 of his wins that season were consecutive, from April 12th to July 3rd, giving him a 15-1 start to the year, with an ERA of 1.31.

Traded to the Texas Rangers for pitchers Jim Bibby, Jackie Brown and Rick Waits midway through the 1975 season, Gaylord Perry continued to pitch well winning 18, 15 and 15 games over the three seasons. The Rangers thought he was washed up, though, and sent him back to the National League after the 1977 season, in return for middling left-handed relief pitcher Dave Tomlin. He proved the Rangers wrong by winning another Cy Young Award with the San Diego Padres in 1978, leading the team to its first winning record as he went 21-6, 2.73 and pitched in his last All-Star Game. After a frustrating season with the Padres in 1979, when the team tumbled back to the cellar and he was only 12-11, albeit with a solid 3.06 ERA, he announced his retirement at the end of the season. The Padres then worked out a deal with the Rangers, sending him, infielder Tucker Ashford and minor leaguer Joe Carroll in return for much-traveled first baseman Willie Montanez. He was 6-9 for Texas before the New York Yankees acquired him in mid-August in return for Ken Clay to solidify their starting rotation for the stretch run, as they were locked in a close pennant race with the Baltimore Orioles. The Yankees won the AL East race, with Perry going 4-4, but with an ERA over 4.00, then were swept by the Kansas City Royals in the ALCS without Perry taking the mound.

Now a free agent, Perry signed with the Atlanta Braves for what seemed like a last season; however, he went 8-9 in a year shortened by the 1981 strike, leaving him just short of 300 wins at age 43. He had to wait until early March to find a team to give him another shot, even though he was still a league-average pitcher. The last-place Seattle Mariners signed him in what was largely derided as a publicity stunt, but he had the last laugh, justifying his spot in the starting rotation with a solid 10-12 record and over 200 innings of work. He picked up his 300th win, then returned for another season in 1983. He started the season 3-10, was released, signed on with the Kansas City Royals and pitched well down the stretch, going 4-4, 4.27 in 14 starts. It seemed that he could have continued to pitch, but this time he hung up his cleats for good at age 44.

He has 314 career wins; when he won his 300th game with the Seattle Mariners in 1982, he was the first pitcher to reach the milestone since Early Wynn 19 years earlier. It was widely written at the time that he would be the last of the breed; in fact, he was joined over the next few years by a number of contemporaries, including Steve Carlton, Tom Seaver, Don Sutton and Phil Niekro.

A dreadful hitter, even for a pitcher, Perry compiled a .131 career BA, and a .156 OBP. Perry holds the batting record of most strikeouts in a season without collecting a single walk. In 1970, he struck out 47 times but did not walk once.

In 1988 Perry served as the first baseball coach for Limestone College.

Gaylord Perry was elected to the Baseball Hall of Fame on January 8, 1991 by the Baseball Writers Association of America. His first Baseball Card appearance was in the 1962 Topps set. In 2016, he was honored by the Giants with a statue on the concourse outside of AT&T Park, joining a quartet of former teammates also in the Hall of Fame: Willie Mays, Willie McCovey, Juan Marichal and Orlando Cepeda.