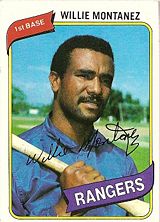 Willie Montañez was signed by scout Chase Riddle. He made his major league debut at the age of 18 with the California Angels in 1966. When he broke into the majors that year, another rookie on the team was 20-year-old Jay Johnstone, who later teamed up with Montañez on the Philadelphia Phillies.

A couple of years later, Montañez, then in the St. Louis Cardinals organization, had the distinction of being the player substituted for Curt Flood when Flood refused to report to the Phillies following his trade from the Cardinals after the 1969 season. The trade gave Willie the opportunity to play in the big leagues again briefly in 1970, and in 1971 he finished second in the Rookie of the Year voting to the Atlanta Braves' Earl Williams. He hit 30 homers that first season, but never came close to matching that total again, only swatting as many as 20 one other year. However, he did lead the 1972 National League with 39 doubles.

Montañez played first base and outfield for nine different major league teams. He had a .279 lifetime batting average and was an All-Star in 1977 with the Braves. He was a good hitter for average who did not walk much and had only limited power outside of his rookie season.

Willie played for the Caguas Creoles and the Santurce Crabbers of the Puerto Rican Winter Baseball League. He made his first baseball card appearance in the 1971 Topps set. He later was a scout.