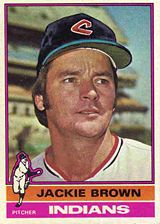 "On a trip into Boston in late July 1973 the team was sharing the Sheraton with a convention of the Massachusetts state teachers union and perhaps 500 delegates. Like the Rangers, it turned out that some of these Massachusetts school teachers were no rookies in the party league themselves. Around midnight, I encountered a pitcher, Jackie Gene Brown, the pride of Weewoka, Oklahoma, in charge of a large hospitality suite and wearing a badge that identified him as Ernest Blumenthal of Brookline, candidate for treasurer of the teachers union. 'The guy said he'd let me pretend to be him if I could get free tickets tomorrow,' Brown explained to me. 'Come in and have a drink... and I appreciate your vote.'" - Mike Shropshire, from Seasons In Hell

The brother of Paul Brown and uncle of Daren Brown, pitcher Jackie Brown was a seven-year veteran, doing much of his damage with the 1974 Texas Rangers. In 35 games (26 starts), he hurled 9 complete games with a 13-12 record, 3.57 ERA and 134 strikeouts in 216 2/3 innings. He was packaged with Jim Bibby during the 1975 season and exiled to the Cleveland Indians for Gaylord Perry and finished his career with our former neighbors to the north, the Montreal Expos, in 1977.