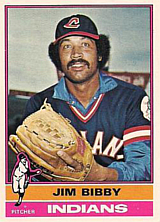 "That's the fastest ball I ever saw. Actually I didn't see it. I just heard it." - Reggie Jackson, after facing Jim during Jim's no-hitter on July 30, 1973

Pitcher Jim Bibby played a dozen years in the majors, hurling a no-hitter and appearing in an All-Star Game during his career.

Originally signed by the New York Mets in 1965, Bibby missed the following two seasons due to military service, seeing combat action during the Vietnam War. Following the 1971 season, he was traded to the St. Louis Cardinals as part of an eight-player deal. He reached the majors with the Cards as a September call-up in 1972. In June 1973, the Cardinals traded Bibby to the Texas Rangers for Mike Nagy and John Wockenfuss. He soon joined the Rangers' rotation and, in his third start, he threw a one-hitter against the Kansas City Royals. A month later, on July 30th, he hurled a no-hitter against the defending World Series champion Oakland Athletics. He was the first rookie since at least 1900 (perhaps the first ever) to have three consecutive double-digit strikeout games; both John Montefusco and Fernando Valenzuela would follow suit within the next decade. Despite these moments of brilliance, he ended the year with a tough luck 9-12 mark. The following year, he went 19-19 in 41 starts under skipper Billy Martin.

Midway through 1975, Bibby was traded to the Cleveland Indians as part of the deal that brought Gaylord Perry to Texas. In early 1978, he became a free agent. About Jim's free agency...:

"In the spring of 1978, Jim Bibby became a free agent because the Indians refused to or forgot to pay him his $10,000 bonus for the 1977 season. Bibby had had to continually bug the front office for the bonus he was owed from the 1976 season, so this time he was really running out of patience. 'Bibby had a clause in his contract that he would receive an extra $10,000 if he made thirty starts,' said [Indians farm director] Bob Quinn. 'Bibby got that thirtieth start the last day of the 1977 season. But the contract stated that we had to pay him the bonus within thirty days of the end of the regular season. A guy in the accounting department told me that we had the check in his file. [Indians GM] Phil Seghi told him that we owned Bibby the ten grand. The guy said 'Don't worry about it. We're going to be a little late. We don't have the cash.' For heaven's sake, they didn't have ten grand? At forty-five days, I remember Phil Seghi telling the accounting department that we had to get this bonus paid. After sixty days, Bibby's agent filed a grievance. They took the case to arbitration and won, Bibby becoming a free agent.'" - Terry Pluto, from The Curse of Rocky Colavito

Jim signed with the Pittsburgh Pirates, going 12-4 for the club in 1979 as the team reached the World Series. He started Games 4 and 7 as the Pirates defeated the Baltimore Orioles. The next year, he again won 19 games, against only 6 losses, and made the only All-Star appearance of his career. On May 19th of the following year, against the Atlanta Braves, he gave up a leadoff single to Terry Harper before retiring the next 27 batters, recording another one-hitter. Bibby suffered a torn rotator cuff that caused him to miss the entire 1982 campaign. After returning in 1983, he became a free agent following the season and returned to the Rangers. He pitched in eight games out of the pen for Texas in 1984 prior to being released in June. He then signed with the Cardinals and made two appearances for the Triple A Louisville Redbirds before being released.

During his twelve-year big league career, Bibby won 111 games and struck out 1,079 hitters with a 3.76 ERA. He had some power at the plate, slugging 5 home runs in just 209 lifetime at bats. In 1990, Bibby joined the Winter Haven Super Sox of the Senior Professional Baseball Association. He was 2-4 with a 4.12 ERA in 11 games, officially ending his playing days.

Following his release by the Cardinals organization on July 1, 1984, Bibby immediately began his coaching career as a pitching coach for the Durham Bulls. Bibby spent the next 15 years coaching in Lynchburg, VA for the Lynchburg Mets (1985-1987), Lynchburg Red Sox (1988-1994), and Lynchburg Hillcats (1995-1999). The Hillcats retired his #26 in 2002. He spent 2000 as pitching coach for the Nashville Sounds to close out his baseball career.

Bibby came from an athletic family: his brother, Henry Bibby [1], and his nephew, Mike Bibby [2], both played in the NBA. Jim died after a battle with bone cancer in 2010.