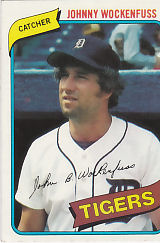 John Wockenfuss was a down-home country boy from the South. "John B" was a fan-favorite during his 10-year stay with the Detroit Tigers. A tobacco-chewing and rather laid-back individual, he was a decent hitter and a versatile (though unspectacular) fielder and receiver. He also had one of the quirkiest batting stance of his time, holding the bat completely over his head with his right elbow sticking out and his right hand fluttering while waiting for the pitch. It worked for him, even if it looked goofy.

Though he hit a solid if unspectacular .262 in the majors, Wockenfuss is remembered by Toronto Blue Jays fans of the late seventies and early eighties as a hitter to rival Ty Cobb. His .376 average over 7 seasons against Toronto still remains the highest batting average ever recorded against the Jays, by anyone who has had over 50 at-bats against them.

As of 2008, is the only player in Major League history with a last name that starts with "Woc". There are currently no players in the minor leagues that have a chance of "threatening" this title any time soon.