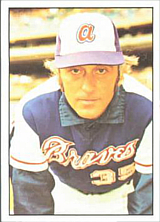 Inducted into Hall of Fame in 1997

"It actually giggles at you as it goes by." - Rick Monday, discussing Niekro's famous knuckleball

Phil Niekro was, by several years, the last man born in the 1930s to be playing Major League Baseball. His longevity was greatly aided by his reliance on the knuckleball, which puts far less stress on a pitcher's throwing arm than a standard repertoire of pitches. He is one of only two pitchers in the last 80 years to win and lose 20 games in the same season. The other was Wilbur Wood, a fellow knuckleballer and contemporary. He is the brother of Joe Niekro and uncle of Lance Niekro.

Niekro missed the 1963 season due to military service. He pitched a no-hitter on August 5, 1973 against the San Diego Padres. On July 29, 1977, Niekro had four strikeouts in an inning; one of the strikeouts came on a pitch that got away from the catcher, and batter Rennie Stennett made it to first base in time. When the 46-year-old Niekro bagged his 300th win by blanking Toronto on the last day of the 1985 season, he became the oldest pitcher to throw a shutout, surpassing Satchel Paige, who was a few months younger when he shut out Detroit 1-0 in 12 innings on August 6, 1952. The record lasted until May 7, 2010, when Jamie Moyer shut out the Braves at age 47. Niekro retired with 318 career wins and holds, with his brother Joe, the record for most wins by a pair of brothers, 538. Niekro also held the career Atlanta Braves strikeout record of 2,912 until 2007, when John Smoltz broke his mark. Phil frequently pitched for mediocre or poor Braves teams, and did not appear in a World Series.

He was elected to the Baseball Hall of Fame on January 6, 1997 by the Baseball Writers Association of America.

After his retirement, he became manager of the Colorado Silver Bullets, an all-female baseball team that toured the country playing semi-pro men's teams. He also managed Atlanta's AAA farm team, the Richmond Braves, in 1991.

"I just aim for the heart of the plate and hope for the best. But I don't know whether the ball will jump up or down or sideways. The best part, I guess, is that the batter doesn't know either." - Phil Niekro