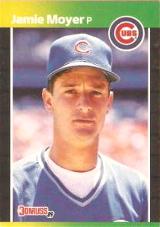 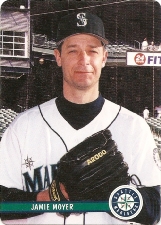 Pitcher Jamie Moyer had a long major league career, but did not reach his prime until he was in his 30s. After six disappointing seasons, it appeared that his major league career might be over; however, after spending all of 1992 in the minors, he was picked up by the Baltimore Orioles and began to resurrect his career by posting a 12-9 record in 1993. He was a journeyman with five clubs until he was traded to the Seattle Mariners in 1996, then averaged 16 wins in his first seven full seasons with the Mariners. He won 20 games twice and was named to the All-Star team as a 40-year-old in 2003. On August 19, 2006, Jamie Moyer was traded with cash by the Mariners to the Philadelphia Phillies for two minor league pitchers, Andrew Barb and Andrew Baldwin.

He won a World Series ring with the Phillies in 2008, then in early 2010 he became a four-decade player and one of the few major league pitchers to win a game at age 47. On May 7th of that year, he pitched a two-hit shutout against the Atlanta Braves, becoming the oldest pitcher to throw a shutout in the majors; Phil Niekro had held the record since 1985. With this shutout he then became the first and only man to throw a shutout in 4 different decades (1980s, 1990s, 2000s and 2010s).

He broke in as a rookie with the Chicago Cubs in 1986, a team on which Rafael Palmeiro was also a rookie.

Moyer was signed as a 6th round pick in the 1984 amateur draft by the Cubs and scout Billy Blitzer.

For a pitcher with such a long major league record, one might think that he skipped the minors. Moyer actually pitched all or part of eight seasons in the minors, with a record of 54-33. He was 23 years old before he made his major league debut. He then spent most of 1991 and all of 1992 in the minors, when he was 29 years old. 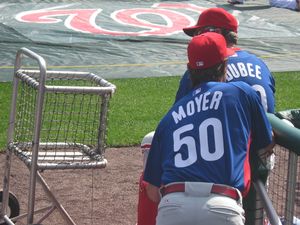 On June 27, 2010, by giving up a home run to Vernon Wells of the Toronto Blue Jays, he passed Robin Roberts for most career home runs allowed with 506.

In 2000, pitching for the Mariners, he became the only pitcher to ever give up exactly 11 runs in two consecutive games, on August 9th and 14th. In fact, the record before that was two outings of exactly 7 runs, accomplished by a number of pitchers. In spite of these major hiccups he went 13-10 that year, but it explains why his ERA was 5.49, an outlier in what was otherwise a streak of 9 consecutive seasons of ERAs between 3.00 and 4.00.

Moyer holds a couple of very obscure hitting records: the longest time between one RBI and his next (16 years, from 1988 to 2004) and the same for doubles (19 years, 1988 to 2007). The reason is that he began his career with the Chicago Cubs in the National League where he came to bat regularly, then, except for a brief stint with the St. Louis Cardinals in 1991, spent the period from 1989 to 2005 in the American League, where the designated hitter kept him away from batting except for a handful of interleague games at the end of the period. Traded to the Phillies in mid-2006, he once again came regularly to the plate.

He also holds a similar pitching record: he won a game against the Atlanta Braves on May 23, 1987, and next beat them on May 25, 2007. He was the first pitcher ever to go more than 20 years between wins against a team. Mike Morgan held the previous record (19 years, 8 months against the Mariners).

Shortly after becoming the oldest pitcher to ever throw a major league shutout, Moyer injured his elbow in a start on July 20, 2010. That ended his season, but he was not ready to call it a career. After resting the elbow for a few months, he attempted a comeback in winter ball that fall, but suffered another injury in his first start. Undaunted, he announced on November 29th that he would undergo Tommy John surgery, with the objective of coming back to pitch in 2012, at age 49. In August 2011, he began rehabilitation work in Clearwater, FL; the Phillies offered him the use of their training facilities there, even though he was still officially a free agent.

In January 2012, he signed a minor league contract with the Colorado Rockies, then made the team as its second starter after putting up an excellent 2.77 ERA in spring training. He made his return to the mound on April 7th, bidding to become the oldest pitcher to ever earn a win, but gave up a lead-off homer to the Houston Astros' Jordan Schafer, and later a two-run shot to J.D. Martinez in the 4th. His teammates did not help him, committing 3 errors behind him, and he left after 5 innings, trailing 4-0. He was saddled with the 7-4 loss, while his opponent, Lucas Harrell, was barely one year old when Moyer first pitched in the majors.

He became the oldest pitcher to win a game on April 17th against the San Diego Padres; at 49 years and 150 days; he passed Jack Quinn, who last won a game for the Brooklyn Dodgers on September 13, 1932. When asked about the man he beat after the game, he explained that he did not know much about baseball history; the Hall of Fame took the opportunity to offer him an internship position with the institution... if he were ever to retire as a player. Oddly, he set the record only two days after 46-year-old Masahiro Yamamoto became the oldest starter to win a game in Nippon Pro Baseball.

The Class A Fort Myers Miracle of the Florida State League also took advantage of the publicity around Moyer's feat to run a promotion called "Can you throw harder than Jamie Moyer?". Fans were given an opportunity to try to beat the radar gun reading on Jamie's fastball of 78 mph, but none of the 85 fans who attempted it in the first week was successful, showing that while his fastball may have been extremely slow by major league standards, it was still miles ahead of what an average person could manage - even in the prime of youth.

In the meantime, Jamie lowered his season's ERA to 2.28 with a no-decision in his fourth start of the year on April 25th. He won his second game on May 16th, 6-1 over the Arizona Diamondbacks, even driving in two runs with a 4th-inning single; the ball never left the infield though, but the speedy Dexter Fowler was able to score all the way from second base while a distracted 1B Paul Goldschmidt was vainly attempting to tag the running Moyer. Those RBI made Jamie the oldest player to drive in a run in major league history, passing Julio Franco.

When he started a game at Marlins Park on May 21st, he pitched in the 50th major league ballpark of his career - the highest total ever recorded. It was a quick night for him however, as Giancarlo Stanton reminded him of his mortality by absolutely crushing one of his pitches in the 4th inning for a grand slam that took out some of the lights in the park's new left field scoreboard; he was charged with the 7-4 loss to the Miami Marlins.

The fairy tale ended on May 30th, when the Rockies designated him for assignment after he had been rocked for four homers in his last start, against the Cincinnati Reds, bringing his record to 2-5, 5.70 in 10 starts. Had he pitched just eight days later, he would have passed Arlie Latham to go into ninth place on the Oldest Players list. However, he managed to find another team willing to give him a shot, as the Baltimore Orioles signed him to a minor league contract on June 6th and assigned him to the AAA Norfolk Tides. He asked for and was granted his release on June 23rd, after going 1-1, 1.69 for Norfolk, when told that it was not in the Orioles' plans to bring him back to the majors in the near future. On June 25th, he signed with the Toronto Blue Jays, who assigned him to the AAA Las Vegas 51s. With the Jays having lost three starters to injury during the past month, there was a real opportunity for Moyer to return to the big leagues. However, he was released on July 6th after two starts with an ERA in excess of 8 and a 1-1 record at Las Vegas. That marked the end of a very long professional career that had started back in 1984.

Following his retirement, he was offered a job as a television broadcaster with the Philadelphia Phillies starting in 2014. However, he quit after one season, explaining that he wanted to spend more time with his family, living in California.

He is the son-in-law of Digger Phelps (former University of Notre Dame basketball coach and current ESPN commentator). His son Dillon Moyer was selected by the Los Angeles Dodgers in the 38th round of the 2013 amateur draft, and another son, Hutton Moyer was an infielder for the Pepperdine University team which reached the 2014 CWS Super Regionals before being a 7th-round pick of the Los Angeles Angels in the 2015 amateur draft.

On July 27, 2005, Moyer and starting catcher Pat Borders became the oldest starting battery in Major League history. Both were 42 years old at the time for a combined age of 84. This was Borders' final Major League game.

On July 21, 2007, Moyer and opposing starter David Wells formed the second-oldest pitching match-up in MLB history with a combined 88 years and 307 days. Only Don Sutton and Phil Niekro in June of 1987 were older. Moyer was the oldest player in Major League Baseball when he retired, having claimed the title after Julio Franco left the major leagues at the end of the 2007 season.

Moyer passed the 250 wins mark during the 2009 season, a notable mark for pitchers aspiring to the Hall of Fame (he ended up with 269). Pitchers in the 20th century with 250 victories have either gotten into the Hall or been very strong candidates. Just to give two examples, Bob Gibson had 251 victories and Carl Hubbell had 253. There are a few Hall of Famers on the similarity scores list of the most similar pitchers to Moyer, and others on the list may eventually get in.

On the other hand, his scores on the Black Ink, Gray Ink, Hall of Fame Standards and Hall of Fame Monitor tests all put him below the average/likely Hall of Fame level at the time.

He was inducted into the Seattle Mariners Hall of Fame on August 8, 2015. He became eligible for the Hall of Fame in 2018 but dropped off the ballot after just one year, having received 10 votes.