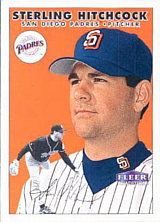 A solid starter for most of his career, Sterling Hitchcock threw multiple pitches including a four-seam fastball, a splitter and a sinker. Although injuries hampered him later in his career (including an elbow problem in 2000), he was one of the better strikeout pitchers in the league, ranking second among starters in 1999 with 8.5 Ks per 9 innings.

He was the hero of the San Diego Padres' surprise run to the 1998 World Series when he won two games against the Atlanta Braves in the 1998 NLCS and was named the series' MVP. He gave up 1 run on 5 hits in 10 innings over two starts; he had earlier won his only start of the Division Series over the Houston Astros and made another good start in the World Series against the New York Yankees, giving up 1 earned run in 6 innings but departing with a no-decision.