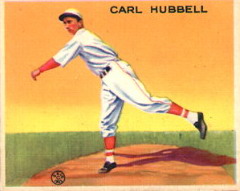 Carl Hubbell was a Hall of Fame pitcher with the New York Giants from 1928 to 1943, widely regarded as the top National League lefty of his day. So great was his screwball that in the 1934 All-Star Game he struck out five consecutive Hall of Famers: Babe Ruth, Lou Gehrig, Jimmie Foxx, Al Simmons, and Joe Cronin, one of Major League Baseball's iconic performances.

A nine time All-Star, Hubbell led the NL in wins and ERA three times and winning percentage twice. In the mid-1930s he had a five-year streak of +20 win seasons, topped by a circuit-pacing 26 in 1936, posted alongside NL winning percentage and ERA crowns. So different was pitching in his day he led the NL in complete games (25) and saves (8) the same year, a 21-win campaign in 1934 that saw him pace the league in both ERA and ERA+.

A measure of how highly Hubbell was regarded during his playing days is his being elected by writers to Cooperstown just four years after he retired, before a five-year requirement was instituted. It was his third year on the ballot, tallying 87% of the vote. In contrast, the greatest American League lefty of his era, contemporary Lefty Grove - an overall far superior pitcher - received just 76% in his fourth year on the ballot, sixth after retiring.

Hubbell won three 1-0 decisions in a month in 1933, something last done by Dick Rudolph in 1916. It would be 79 years until Félix Hernández became the next hurler to do so.

In 1936 and 1937, Hubbell had a string of 22 consecutive starts which were won by the Giants, setting a major league record. It was later matched by [[Whitey Ford]­] in 1953 and finally topped by Kris Medlen in 2012, but both pitchers' streaks went over several seasons, as Ford missed time to military service while Medlen did not become a full-time major league starter until midway through his. Hubbell, in contrast, was a full-time starter for the entire streak.

Upon his retirement, Horace Stoneham named him farm director, a position he held for 34 years. Then from 1977 to 1988, Hubbell was a scout for the Giants, giving him a 60-year career with one organization. He died from injuries sustained in a car accident at the age of 85.

His first baseball card appearance was in the 1928 R315 set. His brother George Hubbell pitched in the minors.

"Hubbell is the greatest pitcher in the league, but he presents no mystery to the onlooker. The source of his skill is...the curveball setting up the screwball." Waite Hoyt.