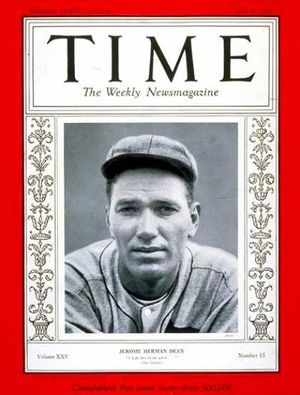 Dizzy on the cover of TIME.

Ace of the Gas House Gang[edit]

Dean was best known for leading the 1934 "Gas House Gang" team. He had a 30-7 record with a 2.66 ERA during the regular season. His brother, Paul Dean, was also on the roster, and was nicknamed "Daffy," although this was usually only done for press consumption. He had known success at an early age, including in the minor leagues, when he was named MVP of the Texas League in 1931 thanks to 26 wins, a 1.57 ERA, and 303 strikeouts for the Houston Buffaloes.

The Gas House Gang, as the southernmost and westernmost team in the major leagues at the time, became a de-facto "America's Team", and members, particularly Southerners such as the Dean brothers and Pepper Martin, became folk heroes in Depression-ravaged America, who saw in these players, dirty and hustling rather than handsome and graceful, a spirit of hard work and perseverance, as opposed to the haughty, highly-paid New York Giants, whom the Cardinals were chasing for the National League pennant.

Dean liked to brag about his prowess and make public predictions. Dizzy predicted, "Me an' Paul are gonna win 45 games". On September 21, Dean pitched no-hit ball for eight innings against the Brooklyn Dodgers, finishing with a three-hit shutout in the first game of a doubleheader, his 27th win of the season. Paul then threw a no-hitter in the nightcap, to win his 18th, to match the 45 that Diz had predicted.

"Gee, Paul," Diz was heard to say in the locker room afterward, "if I'd a-known you was gonna throw a no-hitter, I'd a-thrown one too!" Few in the press now doubted Diz's boast, as he was also fond of saying, "If you can back it up, it ain't braggin'."

Diz finished with 30 wins, the last NL pitcher to do so, and Paul finished with 19, for a total of 49. The Cards needed them all to edge the Giants for the pennant, setting up a matchup with the American League champion Detroit Tigers in the World Series. After the season, Dizzy Dean was awarded with the National League's Most Valuable Player Award.

Diz had one more prediction: "Me an' Paul are gonna win this here World Series." Diz won Game 1 and Paul won Game 3. However, during Game 4, Diz was used as a pinch-runner, and was hit in the head by an errant throw. Afterwards, he told the press, "The doctors x-rayed my head and found nothing". Diz pitched the next day, but lost Game 5. Paul won Game 6, completing his half of the deal, and Diz completed his by pitching a shutout to win Game 7.

While pitching for the NL in the 1937 All-Star Game, Dean faced Earl Averill of the Cleveland Indians, batting for the American League. Averill hit a line drive back at the mound, hitting Dean on the foot. Told that his big toe was "fractured," Dean said, "Fractured, hell, the damn thing's broken!" Dean came back too soon, and changed his pitching motion in a way that favored his sore toe. In so doing, he hurt his arm, losing his great fastball.

By 1938, Dean's arm was largely gone. Chicago Cubs Scout Pants Rowland was tasked with the unenviable job of obeying owner Philip K. Wrigley's direct order to buy a washed-up Dizzy Dean's contract at any cost. Rowland signed Dean for $185,000, one of the most expensive contracts in baseball history. Dean helped the Cubs win the 1938 NL pennant, and pitched gamely in Game 2 of the World Series before losing to the New York Yankees.

Dean limped along for the Cubs until 1941, when he retired and became a coach. Between the ages of 23 and 27, he was arguably the best pitcher in baseball; by 28, he was just another pitcher, and at 31 he was done.

Dizzy Dean made a one-game comeback on September 28, 1947. After retiring as a player, the perennially cash-poor St. Louis Browns hired the still-popular Dean as a broadcaster to drum up some badly needed publicity. After broadcasting several poor pitching performances in a row, he grew frustrated, saying on the air, "Doggone it, I can pitch better than nine out of the ten guys on this staff!" The wives of the Browns pitchers complained, and management, needing to sell tickets somehow, took him up on his offer and had him pitch the last game of the season. At age 37, Dean pitched four innings, allowing no runs, and rapped a single in his only at-bat. Rounding first base, he pulled his hamstring. Returning to the broadcast booth at the end of the game, he said, "I said I can pitch better than nine of the ten guys on the staff, and I can. But I'm done. Talking's my game now, and I'm just glad that muscle I pulled wasn't in my throat."

He became a well-known sportscaster, famous for his wit and often-colorful butchering of the English language. He chose to build on, rather than counter, his image as a not-too-bright country boy, as a way of entertaining fans: "The Good Lord was good to me. He gave me a strong right arm, a good body, and a weak mind." He once saw Browns outfielder Al Zarilla slide into base, and said, "Zarilla slud into third!" Later, doing a game on CBS, he said, over the open mike, "I don't know why they're calling this the Game of the Week. There's a much better game, Dodgers and Giants, over on NBC." Every so often, he would sign off by saying, "Don't fail to miss tomorrow's game!" These manglings of the language only endeared him to fans, presaging such beloved ballplayers-turned-broadcasters as Ralph Kiner, Herb Score and Jerry Coleman.

An English teacher once wrote to him, complaining that he shouldn't use the word "ain't" on the air, as it was a bad example to children. On the air, Dean said, "A lot of folks who ain't sayin' 'ain't,' ain't eatin'. So, Teach, you learn 'em English, and I'll learn 'em baseball".

Dean died at age 64 in Reno, NV. A Dizzy Dean Museum was established in Jackson, MS. The building was significantly expanded, and the Dean exhibit is now part of the Mississippi Sports Hall of Fame, located adjacent to Smith-Wills Stadium, a minor-league baseball park. The street leading into it is named for another Baseball Hall of Famer who lived in Mississippi, Negro Leagues legend Cool Papa Bell.

Despite having what amounted to only half a career, in 1999, he ranked Number 85 on The Sporting News list of the 100 Greatest Baseball Players, and was nominated as a finalist for the Major League Baseball All-Century Team.

He was the subject of a Hollywood biographical picture, entitled The Pride of St. Louis (1952).

Some or all content from this article is licensed under the GNU Free Documentation License. It uses material from the Wikipedia article "Dizzy Dean".