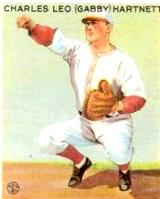 "I rated Gabby the perfect catcher. He was super smart and nobody could throw with him. And he also was an outstanding clutch hitter." - Joe McCarthy

Charles Leo "Gabby" Hartnett (December 20, 1900 - December 20, 1972) was a catcher and manager who played nearly his entire career with the Chicago Cubs. He is widely considered to have been the greatest National League catcher in the first half of the 20th century.

Hartnett was born in Woonsocket, RI as the oldest of 14 children. Joining the Cubs in 1922, he proved himself an excellent backstop through the 1920s; but a succession of injuries often kept him out of the lineup. He kept pace with the increasing offense of the "live ball" era, hitting 24 home runs in 1925 to finish second in the league. 1929 was especially frustrating, as an inexplicable sore arm limited him to one game behind the plate and 24 games as a pinch-hitter as the Cubs won the pennant; Hartnett would strike out in all three of his World Series at bats. But he rebounded with a remarkable season in 1930, hitting .339 with career highs of 37 home runs - then a record for catchers - and 122 runs batted in. In the meantime, his quiet and unpretentious manner had inspired teammates to give him his famous nickname out of irony.

Moving into his 30s, when most catchers find themselves wearing out, Hartnett was just getting started. Although he had caught over 100 games only four times in the 1920s, he would do so for the next eight consecutive seasons (1930-1937), and in 1939 he broke Ray Schalk's major league record of 1,727 career games as a catcher. Hartnett also finished among the NL's top ten in slugging percentage seven times in his career.

Named an NL All-Star for the first six games that were played (1933-1938), Hartnett was catching when pitcher Carl Hubbell set a record in the 1934 All-Star Game game by striking out Babe Ruth, Lou Gehrig, Jimmie Foxx, Al Simmons, and Joe Cronin in succession.

On September 28, 1938, with the Cubs trailing Pittsburgh by only half a game, he experienced the highlight of his career. The lightless Wrigley Field was gradually being overcome by darkness in a hard-fought game with the Pirates, the score tied 5-5; if it had become too dark, the game would have needed to be replayed from the beginning. With two out in the bottom of the ninth, two strikes on him, and the umpires ready to end the game, Hartnett launched a shot into the gloom and haze which would be remembered as his "Homer in the Gloamin'". The Cubs were now in first place, culminating a tremendous 19-3-1 September run, and the pennant would be clinched three days later. Unfortunately, the Cubs were swept in the World Series by the New York Yankees, their fourth Series loss in ten years.

Afterward, he managed in the minor leagues for five seasons, retiring to Lincolnwood, IL in 1946. Gabby Hartnett was inducted into the Hall of Fame in 1955. Later he worked as a coach and scout for the Kansas City Athletics for two years in the mid-1960s. He died of cirrhosis in Park Ridge, IL on his 72nd birthday. He is one of three Hall of Famers to die on his birthday. He is interred in All Saints Cemetery in Des Plaines, IL.

Hartnett gained his nickname by not talking to the media as a rookie. The newspaper men dubbed him "Gabby".

He is highlighted in Heroes Behind the Mask as one of the top catchers of all time. In Chuck Rosciam's recent comparative study of catchers, he ranks number 1 all-time because he dominated his contemporaries by a wide margin, both defensively and offensively.

Some or all content from this article is licensed under the GNU Free Documentation License. It uses material from the Wikipedia article "Gabby Hartnett".