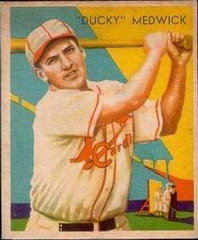 "(Medwick) was the meanest, roughest guy you could imagine. He just stood up there and whaled everything within reach. Doubles, triples, home runs - he sprayed 'em all over every park." - Leo Durocher, his teammate on the Gas House Gang

Joe Medwick played seventeen seasons in the major leagues, hitting a sterlng .324. A Hall of Fame outfielder primarily with the St. Louis Cardinals, he won the 1937 National League Most Valuable Player Award on the strength of the senior circuit's last Triple Crown.

In 1936, Medwick led the National League with 64 doubles, a NL record that stands to this day. He dominated the league the next year, when he was named MVP. He led the NL in a dozen offensive categories, including batting (.374) and RBI (154), and tied for the lead in home runs (31).

Traded in 1940 to Brooklyn, Medwick helped the Dodgers to their first pennant in 21 years in 1941. After spending a few years with the wartime New York Giants and Boston Braves he came back to Brooklyn for one year before returning to the Cardinals in 1947. He finished up his big league career the next year alongside a rampaging Stan Musial, who fell just a home run short of his own Triple Crown in 1948.

A highly productive all-around hitter, Medwick was a doubles machine. His 540 career two-baggers stand tied for 38th on the all-time list (going into 2022). He was the only major leaguer with 300 doubles before his 28th birthday until Miguel Cabrera matched that feat in 2011. Nine of Medwick's ten most similar players are in Cooperstown, the lone exception being AL batting champ and 7-time All-Star Al Oliver. The most similar player according to similarity scores is Hall of Fame Cardinal Jim Bottomley, a veteran with the 1932 Redbirds when Medwick arrived.

Medwick earned his nickname when a woman who had seen him swim said he swam like a duck. While teammates stopped calling him that (or "Ducky-Wucky") and preferred to call him "Muscles" for his move obvious attribute, fans held onto the more colorful moniker.

Medwick was serving as a guest instructor at the Cardinals spring training camp in St. Petersburg, FL when he suffered a fatal heart attack at the age of 63. Medwick's obituary says that he was controversial as a ballplayer and might have been elected to the Hall earlier had he not antagonized sportswriters. The obituary also claims his career declined after a 1940 beaning he never fully recovered from. Indeed, the numbers on either side of that season vary greatly.