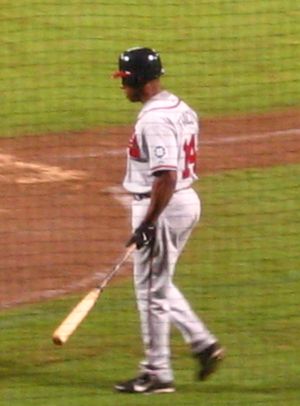 In 2006 he hit .273 with 2 home runs and 6 stolen bases in a pinch-hitting and spot-starting role for the New York Mets. Franco started the season with the Mets in 2007, but the team designated him for assignment. Days later he cleared waivers, and was signed by his old team, the Atlanta Braves.

Julio stated that his desire was to collect both a paycheck and a pension check in the same year from a team (in other words, play till he's 50). He missed that by a few years.

Franco only topped 200 hits in a season once in his major league career, but had a career OPS+ of 111.

Franco, his teams, and his teammates[edit]

A review of Franco's career is a trip down memory lane . . .

When Franco broke in with the Philadelphia Phillies in 1982, Pete Rose was playing first base for the team, Mike Schmidt still had three home run championships to go in his career, and Steve Carlton (who won 23 games in Julio's rookie year) would continue to pitch for six more years.

When Franco joined the Cleveland Indians in 1983 to play shortstop, it was just the year after Joe Charboneau had played his last year for the Indians, and it was one year before Indians pitcher Rick Sutcliffe would be traded to the Chicago Cubs and win the 1984 National League Cy Young Award.

When, after hitting over .300 three times with the Indians, Julio Franco joined the Texas Rangers in 1989 to play second base, Juan Gonzalez was a 19-year-old rookie on the team, Rafael Palmeiro was the 24-year-old first baseman who hit only 8 home runs in 156 games that season with the Rangers, Ruben Sierra at age 24 had the best year in his career, and 42-year-old Nolan Ryan won 16 games and would pitch for four more seasons after that.

When Franco moved to the Chicago White Sox in 1994, he was already 35 years old. It was the year that White Sox player Frank Thomas won his second MVP award and Franco as DH often batted cleanup behind him.

In 1996, when Franco came back to Cleveland, the outfield there was composed of Manny Ramirez, Kenny Lofton and Albert Belle. Franco mostly played first base.

In 1997, he was already one of the ten oldest players in the league.

In 2001, when he joined the Braves for the first time, John Rocker was the fireman.

He led the league in batting in 1991, before expansion. He once came as close as 8th in the MVP voting, in 1994 when teammate Frank Thomas was the winner.

He led the league in at-bats in 1984, when Jim Rice was second and only one at-bat behind him.

He won the first of his five Silver Slugger Awards in 1988, the year that Jose Canseco was MVP.

A good basestealer in his prime, Franco first stole 30+ bases in 1983, a year when Rickey Henderson led the American League with 108, Rudy Law was second in the league, Willie Wilson was third, and U L Washington hit his peak with 40.

Franco's age and his experiences in baseball around the world[edit]

The birthday listed above is not necessarily entirely accurate as no one knows exactly how old Julio is and Julio himself has been secretive about his true age. Julio, like many other Dominicans, likely broke into pro ball with a false birth certificate.

On April 6, 2004, he was the starter at first base for the Braves on opening day against the Mets. At 45 years and 227 days, he was the oldest position player to ever be a starter on opening day. In 2019, Ichiro Suzuki came within a few months of matching his record, but no one else has come close.

On April 20, 2006, he became (at age 47) the oldest player ever to hit a home run in the majors. He repeated the feat on September 30th, in a game in which he matched a career high with 5 RBIs. Even more amazing is how many times he homered in his last few years. The list of players over 45 who have hit home runs includes Franco 19 times, Jud Wilson four times, John Henry Lloyd and Cap Anson three times and Jack Quinn, Biz Mackey, and Carlton Fisk once each. By hitting a home run run in 2007, he pushed the record for oldest player to homer to 48 years and 254 days, while he later set the mark for the oldest RBI by driving in a run 25 days after his 49th birthday. On May 16, 2012, pitcher Jamie Moyer drove in a run, breaking Franco's record by 155 days.

When MLB acknowledged in 2021 that the Negro Leagues were major leagues, many big-league records were impacted, including the mark for the oldest player to hit a home run. Shortly thereafter, it was discovered that Jud Wilson was actually the oldest player to homer in a major-league game. Wilson hit a home run for the Homestead Grays on September 23, 1945, at the age of 49 years, 206 days. As of the start of the 2021 season, the four oldest players to hit a home run in a big-league game (in descending order of age) were Wilson, Franco, Mackey (47 years, 339 days), and Quinn (46 years, 361 days).

When Franco faced Roger Clemens on June 15, 2007, it was the oldest pitcher-batter matchup in over 53 years since Rube Walberg pitched to Nick Altrock in 1933. Their combined age was 93 years, 246 days. They had first faced off over 23 years earlier. After being released by the Mets and Braves in 2007, Franco returned to Mexico in 2008. He was playing for the Tigres de Quintana Roo when he finally announced his retirement on April 30th, at the age of 49. In 2009, he managed the GCL Mets in the Gulf Coast League, then spent two seasons as manager of the Pericos de Puebla, in the Mexican League, in 2012 and 2013.

Julio Franco finished his career with 2586 hits in the major leagues, 626 in the American minor leagues, 358 in the Mexican League, 286 in the Japanese Pacific League, 267 in the Dominican Winter League and 156 in the Korea Baseball Organization. Overall he thus had 4,279 hits as a professional baseball player. That put him in the small group of players with over 4,000 hits in the professional ranks.

He became eligible for election to the Hall of Fame in 2013 but received only 1.1% of the vote and was dropped from the ballot.

On May 20, 2014, he returned briefly to playing professional baseball when the Fort Worth Cats of the independent United League signed him to a contract as a player-coach for a nine-game homestand. In his first game of the 2010s, he went 1 for 3 with a walk and a run scored, making him one of the very few men to have played professionally in five decades. He went 6 for 27 (.222) in 7 games. In February 2015, he decided to prolong the experience by signing a contract as player/manager of the Ishikawa Million Stars of the Baseball Challenge League, Japan's equivalent of the indy leagues.