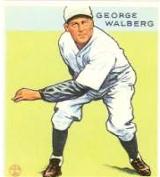 Rube Walberg, who won 155 major league games, was a star in the years 1929-1931 when the Philadelphia Athletics won the pennant each year. He had a 1.93 ERA in 14 World Series innings pitched.

He also had 32 saves in his major league career.

Over 10% of Walberg's 163 home runs were given up to Babe Ruth (17). Ruth had more home runs against the left-handed Walberg than against any other pitcher. Included in the 17 are 4 homers in his 60-HR season. Milt Gaston also gave up 4 HRs to Ruth in 1927, and no one gave up more.

He was with the Portland Beavers prior to becoming a major league regular. Walberg had grown up on a farm, left school after eighth grade to do farm work, and pitched independent ball in 1921. After baseball, he ran a restaurant in Miami, FL before retiring in Arizona.