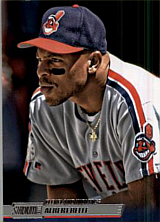 "Outside of Cleveland, he may be regarded as the man Will Rogers never met." - Bob Costas, during the telecast of the 1996 All-Star Game.

“Throughout his major league career Albert Belle has demonstrated a distinct pattern: When the surly slugger gets P.O.’d, baseballs get K.O.’d.” - Mark Bechtel, Sports Illustrated, July 27, 1998

Outfielder Albert Belle was one of the leading sluggers of his time and the first player to hit 50 doubles and 50 home runs in a season. His career was repeatedly marred by his particularly surly conduct both on and off the field. He was noted for rudeness to reporters (NBC Sports personality Hannah Storm during the 1995 World Series in particular) and fans, occasionally becoming violent.

Belle played collegiately at LSU and, upon finishing, was drafted by the Cleveland Indians. While in the minor league system (and at the start of his major league career) he was known as "Joey", and was thought of as a top prospect but a high risk one due to his conduct. Belle underwent counseling and became known as "Albert". Briefly, his behavior improved, but after a time the anger returned in conflicts with reporters and fans.

After a couple of partial seasons with the Indians in 1989 and 1990, Belle emerged as one of the team's top hitters in 1991, when he hit 28 homers and drove in 95 runs in only 123 games. He topped 100 RBI in 1992, and by 1993 led the American League in RBI with 129. He hit 30 or more home runs every season from 1992 to 1999, with a high of 50 in 1995. Albert was caught in 1994 using a corked bat and sent teammate, reliever Jason Grimsley, through the building's ceiling panel to break into the umpires dressing room and retrieve it. Interestingly, the team that caught him, the Chicago White Sox, eventually signed him to play for them. 1994 was his best year, with astonishing numbers: .357/.438/.714 in 106 games as the season was interrupted by the 1994 strike. In September 1995, he had five multiple-homer games in one month, tying a record set by Harmon Killebrew in 1959; the next batter to match this would be Edwin Encarnacion, in May 2014. He also hit 12 homers in 10 games from September 15-27, which is still the all-time record, although it was tied by Kyle Schwarber in June 2021. He hit an incredible 52 doubles and 50 homers that year, scoring 121 runs and driving in 126, both league-leading figures; he added 2 homers in the 1995 World Series, but the Indians were defeated by the Atlanta Braves.

On November 19, 1996, Belle signed with the Chicago White Sox as a free agent. The contract, which made him the highest-paid player in the game and granted him free agency if he did not remain in the top three in salary, played an important role in the final resolution of the 1994 strike. White Sox owner Jerry Reinsdorf was the unofficial head of the "hawks" in player relations. On November 6, he led a vote to reject the new Collective Bargaining Agreement negotiated by the owners' own labor relations committee on the grounds that it did too little to control players' salaries. When the Sox signed Belle to a contract that was derided as an example of gross excess less than two weeks later, Reinsdorf was blasted as a hypocrite. The hawks' position was undermined, and the owners voted to accept the negotiated terms on November 27. Belle and Frank Thomas were supposed to be a tremendous duo in the third and fourth spots in the Sox's lineup. While Frank had a great year in 1997, Albert had a bit of an off year, and when Albert had a great year in 1998 - including a single-season White Sox record of 49 home runs - Frank had an off year of his own.

With salaries skyrocketing around baseball, Belle fell out of the top three highest-paid players after the season, and opted for free agency once again. He signed another big contract, this time for the Baltimore Orioles, but it turned out badly. A fter a solid, but not huge season in 1999, he was bothered by a hip condition in 2000 and hit only 23 homers. He was diagnosed with degenerative osteoarthritis in his hip and had to retire at age 34. However, the Orioles were forced to keep him on their 40-man roster for a number of seasons afterwards, in order to collect insurance on his huge contract.

In 2006, Belle was sentenced to three months in jail for stalking an ex-girlfriend. [1] In 2018, he was charged with indecent exposure and DUI in Scottsdale, charges that were later dismissed.

"It was a taken in baseball circles that Albert Belle was nuts... The Indians billed him $10,000 a year for the damage he caused in clubhouses on the road and at home, and tolerated his behavior only because he was an awesome slugger... He slurped coffee constantly and seemed to be on a perpetual caffeinated frenzy. Few escaped his wrath: on some days he would destroy the postgame buffet... launching plates into the shower... after one poor at-bat against Boston, he retreated to the visitors' clubhouse and took a bat to teammate Kenny Lofton's boombox. Belle preferred to have the clubhouse cold, below 60 degrees, and when one chilly teammate turned up the heat, Belle walked over, turned down the thermostat and smashed it with his bat. His nickname, thereafter, was "Mr. Freeze"." - Buster Olney

By the Black Ink, Gray Ink, and Hall of Fame Monitor methods of appraising whether a player is qualified for the Hall of Fame, Belle is certainly well qualified. It is only by the Hall of Fame Standards method that he falls short. According to the similarity scores method, the closest player to him is contemporary slugger Juan Gonzalez at 897. Two Hall of Famers are on the list, Hank Greenberg and Ralph Kiner, but the others are all good players who fall a little short of Cooperstown. The general consensus around baseball is that one thing that will surely keep Belle out of Cooperstown is his personality. One can imagine that were Belle a warm, friendly type, his numbers, especially considering he had to retire at age 33, would measure up to the likes of Kiner, another slugger with an abbreviated career. In 2007, Belle got 3.5% of the BBWAA vote and was dropped from the ballot. In 2017, he was placed on the Veterans Committee ballot looking at players and executives from "Today's Game" era but received less than 5 votes. He was again on the Veterans Committee's ballot in 2019 and again fell short.