Sammy Sosa hit 609 home runs during an 18-year major league career. He was one of the baseball's biggest stars during his time as a player, but his career has been tainted by allegations of steroid usage, denying him a place in the Hall of Fame.

Sosa was signed as a free agent for the Texas Rangers by scouts Omar Minaya and Amado Dinzey on July 30, 1985. He broke into major league baseball at a very young age, getting 183 at-bats in 1989 at the age of 20. That first year, he was traded from the Texas Rangers to the Chicago White Sox in mid-season.

As a young White Sox player, he was speedy in the outfield, and there was speculation that he might become a Gold Glove center fielder. However, Sosa's ambitions were elsewhere (with his hitting), and as his home runs increased he became known as an inconsistent fielder. At the age of 21 in 1990, he hit 15 home runs with the White Sox, but also stole 32 bases and had 10 triples.

He is best known for the four seasons from 1998 to 2001 when he hit over 60 home runs three times. Although he hit "only" 50 in 2000, that total was enough to win the home run title, while the other three years his 60+ totals garnered him second place. He also led the league with 49 home runs in 2002. Strangely, he did not hit his first grand slam until the 247th homer of his career, on July 27, 1998, against Alan Embree of the Arizona Diamondbacks. This is the most homers before a player has hit his first career slam. His second came a bit quicker however; it was homer #248, hit the next day off Bob Wolcott of the D-Backs.

2001 was the best season of Sosa's career, when he boasted a .328/64/160 line, set a career high in doubles and cut down on strikeouts. The Cubs employed hit-and-run in front of Sosa, and he had a knack for getting the hit to bat in Eric Young Sr. and Ricky Gutierrez.

Sosa had extraordinary strength: during a May 27, 2002 contest, he hit a 1st-inning, broken bat double off the outfield wall in straightaway center field at PNC Park.

On June 3, 2003, Sosa was ejected from a Chicago Cubs-Tampa Bay Devil Rays game in the 1st inning when umpires discovered he had been using a corked bat. Major League Baseball confiscated and tested 76 of Sosa's other bats after his ejection; all were found to be clean, with no cork. Sosa would later state that he had accidentally used the corked bat, which he claimed he only used during batting practice and/or home run contests. On June 6th, Sosa was suspended for eight games, but the suspension was reduced to seven games after appeal on June 11th. The incident caused some to question whether Sosa's 505 home runs (up to that point) had been fairly hit.[1]

After 13 years with the Cubs, it was clear that his batting average and slugging percentage were slipping, so the Cubs let Sosa go to the Baltimore Orioles after the 2004 season. Hitting only .221 without much power (only 14 home runs) in 2005, he was booed much of the season and was let go by the team in December. Sosa turned down a Washington Nationals offer of a minor-league contract and an invitation to spring training in January and a second offer by the club for a non-guaranteed contract worth $500,000 in February. Sosa decided to turn down the second offer on February 15, 2006, making it appear likely that he would fall just short of 600 home runs.

Although Sosa was an immensely popular and likeable player, he was surrounded by questions about whether his achievements were fairly won. During his career, no proof ever appeared that Sosa took steroids, but fans were astounded at the way in which the slender and speedy Sosa of the early 1990s turned into a monstrously muscular home run hitter later in the decade. During his first nine years in the majors, his Adjusted OPS was never over 130, and he never led the league in an important offensive category (other than strikeouts and games played). When he slugged .647 in 1998, that was far above what he had ever done in his previous nine years in the majors. 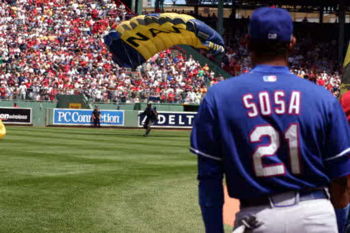 Early in 2007, Sosa signed a minor league deal with the Texas Rangers. It provided for a base salary of $500,000, plus a possible $2.2 million based on incentives. His contract included an additional $200,000 if he was named the American League Comeback Player of the Year for 2007. Sosa said the year off in 2006 would not affect his hitting, comparing himself to Frank Thomas, and even the great Ted Williams, who had missed significant time due to World War II and the Korean War.

Rangers hitting coach Rudy Jaramillo said that Sammy's poor 2005 season was due to bad mechanics at the plate, and that he could help him with that. Sosa made the team in spring training, serving as the team's designated hitter. He began the season needing 12 more homers to become the 5th man in MLB history with 600. He reached that landmark on June 20th, with a blast against the Cubs in an interleague game. The pitcher was Jason Marquis, who was wearing 21, the number Sosa had worn with the Cubs. He ended the year with 609 career home runs. His home run total was the highest for a player born outside the United States, until he was passed by Albert Pujols ten years later, in 2017.

Sosa holds the MLB record for home runs in the most different stadiums, having hit dingers in 45 ballparks, the last of which came on May 17, 2007, off Casey Fossum of the Tampa Bay Devil Rays at The Ballpark at Disney's Wide World of Sports in Orlando, FL, where the Rays played one series against the Rangers. Ken Griffey Jr. is second with 44 different stadiums.

For his final season season, Sosa's Adjusted OPS+ (a measure of a player's offensive production) was only 102, compared to 100 for the average player. However, in spite of his low batting average and on-base percentage, he led the Rangers with 21 home runs and was second on the team to Michael Young with 92 RBI. But, with the Rangers in a rebuilding phase, he was not invited back for the 2008 season and he retired for good.

In June 2009, the New York Times reported that Sosa's name was among the 104 major leaguers who tested positive for performance-enhancing drugs during the 2003 season.

His lifetime on-base percentage of .344 is one of the lowest among major home run hitters of his time. In addition to the records listed below, he is also the only player in major league history to have achieved the dubious "Platinum Sombrero" (five strikeouts in one game) four times. In fact, only one other batter, Ray Lankford, has performed the feat as many as three times.

Sosa became one of the poster boys for the steroid era well before results of a failed test were leaked. Being forever associated with Mark McGwire in the public's mind did not help, and neither did his very particular career arc that looked ever more unlikely as more became known about the widespread use of PEDs in the 1990s and 2000s. As a result, more than anyone, Sosa suffered the brunt of voters' outrage when he first became eligible for the Hall of Fame in 2013 as part of the infamous "steroid ballot". This was because it was perceived that most of his value derived from hitting home runs, whose legitimacy was now put in question. He finished behind every one of the avowed or alleged steroid users of his era, apart from Rafael Palmeiro, receiving a mere 12.5% of the vote. Given the widespread hostility expressed by voters towards steroid users - proven or alleged - he stood little chance at that point of being elected to the Hall by the BBWAA. Indeed, in 2014, he fell to 7.2%, barely enough to remain on the ballot another year, although he did manage to clear the 5% hurdle - albeit not by much - the following five years, as he maintained a small but not growing core of supporters among voting members of the BBWAA. In 2020, on his 8th try, he was at 13.9% and in 2021 he had his highest score yet, at 17%, with one year of eligibility remaining. In his final year in 2022, he made it to 18.5%, still miles away from election, and dropped off the ballot at the same time as Barry Bonds, Roger Clemens and Curt Schilling who had all also seen their candidacies derailed by off-field issues.

Sources vary, but include an article written by: T.R. Sullivan, on MLB.com