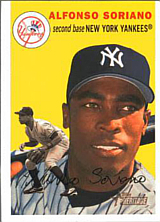 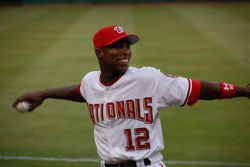 Alfonso Soriano was a seven-time All-Star who played sixteen years in the majors, and the last man to hit 40 home runs and steal 40 bases in the same season (following only Jose Canseco, Barry Bonds, and Alex Rodriguez).

Originally a second baseman with the New York Yankees, from 1999 to 2003 Yankees, he was dealt to the Texas Rangers in 2004 for an in his prime Alex Rodriguez. Two years later, he was traded to the Washington Nationals, where he played exclusively in the outfield. After one year, he signed a large free agent contract with the Chicago Cubs before the 2007 season. He remained an outfielder for the rest of his playing career, which ended back with the Yankees in 2014.

He had the unusual circumstance of hitting 46 home runs but driving in fewer than 100 RBI, as a result of being used as the Nationals' leadoff hitter for most of the 2006 season. During that year he also stole 40 bases. And if that wasn't enough, he hit 40 doubles - making the first 40-40-40 club.

Soriano's career began in Japan with the Hiroshima Carp, training at their Carp Academy for Dominican players. He played for their ni-gun in 1996 and 1997. In 1997 at age 21, he was promoted briefly to the varsity team, wearing uniform number 74; he appeared in nine games, batting .118 (2 for 17) with two walks. Soriano did not enjoy the grueling practices in Japan and hired agent Don Nomura to try to find a way out.

Nomura initially tried to claim that the teenager could not have signed without a legal guardian while the Carp argued that they were following Dominican labor laws, where you could sign at 18, not the Japanese law of 20. When a hearing sided with the Carp, Soriano did what Hideo Nomo had done three years prior - he claimed to retire, on Nomura's advice, voiding his contract. He then asked to sign for a Major League Baseball team. The Carp filed legal action and it turned out that the Japanese officials had added language to the last MLB-NPB agreement forbidding such a move - a language change unknown to the MLB lawyers prior to the case. Commissioner Bud Selig criticized the move and wrote to major league teams that Soriano was considered a free agent. This led to the development of the new Posting System to allow players to go from Nippon Pro Baseball to MLB.

After signing with the New York Yankees, Soriano played in the majors briefly in both 1999 and 2000, but was mostly in the minors each year. He was primarily in the Eastern League in 1999, where he posted numbers of .305/.363/.501 (he also appeared briefly in the rookie league and in Triple A). That year, he enjoyed his first taste of the big leagues: After entering the game as a pinch runner, his first hit in the majors was a dramatic, 11th-inning walk-off home run off Tampa Bay's Norm Charlton on September 24, 1999, "before 44,932 delirious fans at Yankee Stadium," according to The New York Times account. He spent most of 2000 in the International League where he hit .290/.327/.464. From then on, he was in the majors for good.

With the Yankees, he replaced Chuck Knoblauch at second base in 2001, and when he joined the Texas Rangers, Michael Young moved from second base to shortstop to accommodate Soriano. As for the Washington Nationals, they had used several players in left field in 2005 before Soriano showed up in 2006, including Marlon Byrd (41 games), Ryan Church (37 games), and Brad Wilkerson (31 games). The second baseman whose place he did not take for the Nationals was Jose Vidro, whose range at second base had not in the past been as good as Soriano's, but whose fielding percentage had been better.

Up until 2006, his best year had probably been 2002, when he hit exactly .300 with 51 doubles, 39 home runs, and 102 RBI. He also stole 41 bases, thus coming within a hair's width of joining the 40-40 club. The 39 homers were an American League record for a second baseman, a record that lasted until Brian Dozier set a new mark in 2016. He would have been the only second baseman to achieve that goal. However, his walk-to-strikeout ratio that year, as always, was terrible with 23 walks and 157 strikeouts. Defensively that year, as was typical, his range was better than average while his fielding percentage was lower than average. He was traded to the Rangers, along with Joaquin Arias, for superstar shortstop Alex Rodriguez, although the Yankees did take on the remainder of A-Rod's huge contract, compensating for the unequal status between the two players.

In spring training 2006, after being traded to the Nationals for three players (Wilkerson, Armando Galarraga and Terrmel Sledge) Soriano at first refused to play left field for his new team, drawing a great deal of media ire and threats from the team to deactivate him. He consented after this backlash. The spat became quickly forgotten when he turned out to be the team's best player by far, setting a franchise record for home runs with 46, exceeding the mark set by Vladimir Guerrero when the team still was the Montreal Expos.

Soriano became a free agent after the season and on November 19, 2006, he signed an 8-year, 136 million dollar contract with the Chicago Cubs. Soriano continued to hit very well for his new team, belting 6 leadoff home runs in September of 2007, setting a MLB record. His 14 homers that month broke the Cubs franchise record held by Ernie Banks. He ended the year with 33 home runs and 97 runs scored as the Cubs won the NL Central title. In 2008, he missed a good part of the season with injuries, batting .280 with 29 HR in 109 games as the Cubs repeated as division champs. However, in both the 2007 and 2008 Division Series, his bat was kept in check, as he was a combined 3 for 28 with no extra base hits while the Cubs were twice swept in three games. In later years, he began to experience defensive troubles in left field as he lost some of his speed, but remained one of the Cubs most dangerous hitters until the end, even if he did not go on to have a Hall of Fame-type career.

Soriano was traded back to the Yankees by the Cubs on July 26, 2013. He waived his no-trade clause to accept the deal, with the Cubs receiving only minor league P Corey Black in return while accepting to cover about a quarter of the last 1 1/2 year of his huge contract. He was immediately inserted as the struggling Yankees' DH and clean-up hitter that day, but went 0 for 5 in a 10-6 loss to the Tampa Bay Rays. He was held hitless in his next game as well, before exploding with a 4-for-5 day that included a two-run home run and the game-winning hit in the bottom of the 9th in a 6-5 win over the Rays on July 28th. On August 11th, he picked up the 2,000th hit of his career with a homer off Justin Verlander of the Detroit Tigers. On August 13th, he hit two homers and drove in 6 runs in a 14-7 win over the Los Angeles Angels of Anaheim, then followed that the next day with another two homers and 7 RBI, a career high, in a 13-3 win over the same Angels. The 13 RBI over two games were the second most in Yankees history, behind only Hall of Famer Tony Lazzeri, who drove in 15 runs over a two-game span in 1936. He had another great game the next day, August 15th, as he was 4 for 5 with another RBI in an 8-4 loss. In his first at-bat, he hit an absolute rocket to the left field fence that, unfortunately for him, bounced straight into the awaiting arms of LF J.B. Shuck, who threw a laser to second to tag him out; another couple of RBI would have tied the all-time record over three games, but apart from the 3rd inning, when he drove in Brett Gardner with a single, he did not have any teammates on base to help him in his attempt to reach the record. On the following day, he went 3 for 4 with a homer and 4 more RBI in a 10-3 win over the Boston Red Sox, for a four-game total of 13-for-18 (.722), 5 homers, 9 runs scored and 18 RBI. He became just the 6th player to drive in 18 in a four-game span, following Jim Bottomley, Lou Gehrig, Lazzeri, Joe DiMaggio and Sammy Sosa. Not unexpectedly, he was named the AL Player of the Week. Altogether, he hit .255 with 34 homers and 101 RBI between the two teams.

When Soriano collected the 1,000th American League hit of his career on May 12, 2014, he became only the 7th player to have 1,000 hits in both leagues. That group was headed by Hall of Famers Vladimir Guerrero, Frank Robinson and Dave Winfield and also included Fred McGriff, Orlando Cabrera and Carlos Lee. He was hitting .221 with 6 homers and 23 RBI on July 6th when the Yankees decided to release him in order to make room on the roster for newly-acquired Brandon McCarthy. Taken aback by the turn of events, Soriano said that he was contemplating retirement, a move he confirmed after the season. He retired with a .270 average in 1975 games, with 412 homers, 1,152 runs scored, 1,159 RBI and 289 stolen bases despite a very mediocre career OBP of 31 percent. He became eligible for the Hall of Fame in its 2020 election but received only six votes and was dropped from the ballot.

The similarity scores method shows the three batters most similar to Soriano through age 30 being Howard Johnson, Tony Batista, and Matt Williams.

Soriano's uncle Hilario Soriano played in AAA, then was a minor league manager and scout.