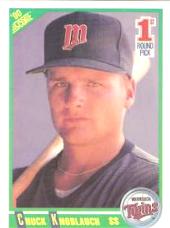 As a rookie with the Minnesota Twins in 1991, he was a key contributor to the team's completely unexpected World Series title; the team had finished in last place in 1990. He went to have a series of excellent seasons for the Twins, making the All-Star team four times between 1992 and 1997. He was the Twins' lead-off hitter during that period, and made history on June 5, 1994, in a game against the Detroit Tigers. He led off that game with a homer off Mike Moore, and added another long ball against Moore in the 7th inning; his opposite number for the Tigers, Tony Phillips, also hit a lead-off homer and then added a homer in th 8th. It was the first time this had happened in a major league game, and it would not reoccur until August 13, 2013, when Brad Miller of the Seattle Mariners and Ben Zobrist of the Tampa Bay Rays reproduced the feat.

The most similar player to Knoblauch, through age 33, was Craig Biggio, indicating that Knoblauch was on track to a possible Hall of Fame career, but he could not keep it up. After 1996 his hitting fell off, and after 1999 it fell off even more.

When he was traded to the New York Yankees, in 1998, expectations were high, and while he hit more home runs than before, his offensive performance as a whole was not up to the standard he had set for himself with great years in 1995 and 1996. Defensively, he began to have throwing problems with the Yankees, and that got a lot of press. He was eventually moved from second base to the outfield in order to minimize the impact of his defensive woes. His period with the Yankees coincided with one of the team's historical peaks, as they reached the World Series all four seasons he was with the team, winning the big prize in 1998, 1999 and 2000 before falling to the Arizona Diamondbacks in seven games in 2001. Knoblauch was no mere bystander, as he played over 100 games all four years and played in 18 of 20 World Series games during that stretch. However, he hit only .250 with 9 homers and 44 RBI in 2001 and the Yankees were not interested in re-signing him afterwards. He moved to the Kansas City Royals instead but hit only .210 in 80 games in 2002. He lost his starting job during the season and found no takers for his services after that so retired at age 34.

Knoblauch stole over 400 bases in his career, putting him at #69 (through 2015) on the all-time list. He also was good at drawing walks, and while he never was the league leader in that category, drew enough walks to retire with a good .378 career OBP.

He was named in the Mitchell Report and later appeared before a Congressional Committee to give testimony. He admitted using human growth hormone in 2001. Transcript In July of 2014, he was arrested in Houston, TX and charged with assault on his ex-wife, Cheri, with whom he had divorced in 2012. The arrest motivated the Minnesota Twins to cancel his planned induction in their team's Hall of Fame.

Knoblauch is the german word for garlic.