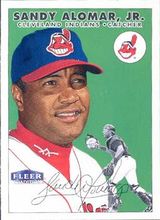 The son of Sandy Alomar, Sr. and brother of Roberto Alomar, catcher Sandy Alomar played two decades in the majors and made the All-Star team 6 times during his career.

Originally signed by the San Diego Padres, Alomar starred in the minors with the Las Vegas Stars in 1988 and 1989, winning The Sporting News Minor League Player of the Year Award and being named the Pacific Coast League MVP. However, with Benito Santiago firmly entrenched as the Padres' regular backstop, Alomar only saw limited playing time in the majors in both of those years (as a teammate of his brother Roberto). Following the 1989 campaign, he was traded to the Cleveland Indians with Carlos Baerga for Joe Carter.

Alomar became a regular behind the plate with the Indians in 1990, hitting .290 in 132 games. He became the first rookie catcher ever to start the All-Star Game and was the unanimous choice for the American League Rookie of the Year Award. However, he struggled with injuries the next five years, never appearing in 100 games in any season during that span.

Alomar bounced back, playing a full season in 1996. The next year, he had his best season, hitting .324 with 21 homers and a 30 game hitting streak, and was named MVP of the All-Star Game in front of a hometown crowd at Jacobs Field, the first player to accomplish that feat. On May 30th, he broke up a perfect game by Mike Mussina of the Baltimore Orioles with a single in the ninth inning. He also starred in the postseason that year, hitting a game-tying home run off Mariano Rivera of the New York Yankees in Game Four of the ALDS and driving in the game-winning run in Game Four of the ALCS against the Orioles. He went on to hit .367 in the World Series as the Indians fell to the Florida Marlins.

Alomar was again teammate of his brother with the Cleveland Indians in 1999 and 2000. In July 2006, he was acquired by the Chicago White Sox for his third stint with the club. He retired after the 2007 season, then in 2010 became a coach with the Indians under manager Manny Acta. When Acta was fired by the Tribe with a week to go before the end of the 2012 season Alomar was named the interim manager. The team went 3-3 over its final 6 games, but Alomar was passed over in favor of veteran manager Terry Francona for the permanent job in 2013. He stayed on as a coach, and during the 2020, he filled in for Francona who was laid up with gastro-intestinal issues.

He became eligible for election to the Hall of Fame in 2013 but received only 2.8% of the vote and was dropped from the ballot.