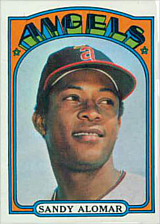 The father of Sandy Alomar Jr. and Roberto Alomar, Sandy Alomar Sr. played fifteen seasons in the big leagues. Originally property of the Milwaukee Braves (the signing scout was Luis Olmo), Sandy was a tremendous defensive player with a weak bat who enjoyed his greatest success as a member of the California Angels, going to the 1970 All-Star Game in the first of consecutive seasons in which he played all 162 games. After playing 648 consecutive games with the Halos, Sandy wound down his career as a role player with the New York Yankees and Texas Rangers. Danny Darwin was the lone major leaguer to have played with both father (Sandy) and son (Roberto).

His one career postseason at bat was in the 1976 ALCS. He pinch hit for Jim Mason against Steve Mingori of the Kansas City Royals in the bottom of the 9th with the 1976 Yankees Yankees down, 7-4, in Game 1. He flied out to left. He also pinch ran for Carlos May in Game 5 and was caught stealing. Dennis Leonard was the pitcher and Buck Martinez was the catcher. The Yankees won Game 5, 7-6.

In addition to his two sons, Sandy's brothers, Rafael Alomar, Demetrio Alomar, and Antonio Alomar, all played minor league ball. His distant cousin, Ramón Conde, played in the majors. During offseasons, Sandy played for the Ponce Lions and the Santurce Crabbers of the Puerto Rico Winter Baseball League.