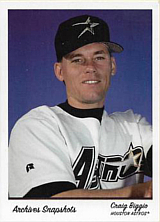 Inducted into Hall of Fame in 2015 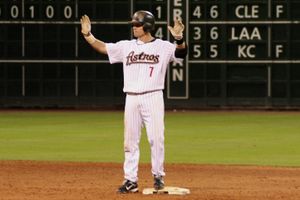 Craig Biggio (pronounced BIDGE-ee-o) retired at the end of the 2007 season with the longest term of service with the same club in Major League Baseball. He had played with the Houston Astros since 1988, reaching the bigs a little over one year after being the team's first round pick, beginning as a catcher, but switched to second base during the 1992 season. He remains the only player in baseball history to be named to an All-Star Game as both a catcher and a second baseman. He would also play two seasons as the team's center fielder. In his first All-Star Game, in 1991, he became the first catcher to have interference called against him when Paul Molitor's bat hit his glove mid-swing. At the time of his retirement, he had played 20 seasons with the same team.

In 1998, Biggio became the first player, after Tris Speaker, to hit 50 doubles and steal 50 bases in a single season. In 2005, he became the modern all-time leader in being hit by pitches, with 273, breaking Don Baylor's previous record of 267. Although Biggio is the "modern" leader, the all-time leader is Hughie Jennings with 287; Biggio fell just two short of that mark. Craig is just one of three players all time with more than 2,500 hits, more than 500 doubles, more than 400 stolen bases and more than 250 home runs. The others are Barry Bonds and Rickey Henderson. Biggio also is the all-time National League leader in leadoff home runs, with 53. The most similar player to Biggio is fellow Hall of Famer Robin Yount, with 8 of his top 10 similar players enshrined in Cooperstown.

While the public may not have thought of Biggio as a big star playing in Houston, he did eventually gain entrance into the Hall of Fame. Every player with his level of runs scored (1,844) and every player with his level of doubles (668) is in the Hall of Fame. He is the all-time career leader in doubles among right-handed hitters. Although he never won an MVP award, he finished in the top 5 twice. Biggio got his 3,000th hit on June 28, 2007. Biggio became the first player to reach 3,000 career hits during a five-hit game (Derek Jeter matched that feat in 2011). Known for his hustling style, Biggio was thrown out trying to stretch one single into a double that day. It sparked the usual slew of articles after a 3,000th hit - some people saying that the old-time cut-offs for the Hall of Fame were now meaningless while others commented on how unappreciated and unrecognized Biggio had been. The first set of boilerplate articles got a boost because Frank Thomas hit his 500th home run on the same day.

Biggio was the top vote-getter among candidates on the BBWAA ballot for the Hall of Fame in 2013; he received 388 votes, representing 68.2% of all ballots. As 75% was required for election, no one was elected that year. In 2014, he finished fourth on the ballot behind three first timers who were elected (Greg Maddux, Tom Glavine and Frank Thomas), but a mere two votes shy of election: he received 427 of 571 votes, with 429 needed for election. He again finished behind three first timers in 2015 - pitchers Randy Johnson, Pedro Martinez and John Smoltz - but his vote total increased to 82.7%, enough for him to gain election to Cooperstown. In being elected, he became the first man to wear an Astros hat on his plaque, preceding Jeff Bagwell by three years.

Since 2008, Biggio has been Special Assistant to the General Manager for the Astros (as of 2019). His #7 was retired by the club that same year and he gained entrance as part of the inaugural class to the Houston Astros Hall of Fame in 2019.

Biggio's son, Cavan Biggio, reached the major leagues in 2019. Biggio became the head coach at St. Thomas High School in 2009 at the time Cavan was a student there. Another son, Conor Biggio, was drafted.