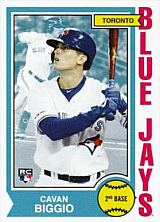 Cavan Biggio is the son of Hall of Famer Craig Biggio. Like his father, he began playing second base after playing other positions, in his case third base and shortstop. He was first drafted out of high school by the Philadelphia Phillies in the 29th round in 2013 but went on to attend the University of Notre Dame. In 2016, he was taken in the 5th round by the Toronto Blue Jays and signed. Biggio began his professional career with the Vancouver Canadians of the Northwest League in 2016, then was promoted for a few games to the Lansing Lugnuts of the Midwest League at the end of the year. Between the two stops, he hit .273/.371/.349 in 62 games, with 27 runs scored and 26 RBI. In 2017, he moved up to the Dunedin Blue Jays of the Florida State League, where he hit .233/.342/.363 in 127 games. He showed some hints of power, with 17 doubles, 5 triples and 11 homers in what is not normally a very hitter-friendly environment. Other positive points including scoring 75 runs scored, drawing 74 walks and driving in 60 runs.

On March 17, 2018, he was one of six second-generation players in the starting lineup for the Blue Jays against the Canadian junior national team; all four infielders were in fact sons of big leaguers, and genuine prospects to boot. He had an excellent season for the AA New Hampshire Fisher Cats, helping lead them to the Eastern League title by hitting .252/.388/.499 in 132 games between second, third and first base. He slammed 23 doubles, 5 triples and 26 homers, scored 80 runs and drove in 99. He led the circuit in homers and was second in RBI, 3 behind Will Craig, and second in runs scored behind teammate Bo Bichette. Cavan was named the circuit's Player of the Year. He started the 2019 season in AAA with the Buffalo Bisons. He was hitting .307 with 6 homers and 26 RBI in 42 games when he was called up to Toronto on May 24th, with the Blue Jays struggling to put runs on the scoreboard.

Cavan made his big league debut on May 24, 2019, playing second base against the San Diego Padres and batting 8th, going 0 for 3 in a 6-3 loss. He got his first hit two days later off Robbie Erlin of the Padres. He added his first big league homer off Matt Wisler a couple of innings later in the same game. He had his first two-homer game on June 13th, against the Baltimore Orioles. On September 17th, he hit for the cycle in an 8-5 win over the Orioles, the first cycle by a Blue Jays player since Jeff Frye on August 17, 2001. His father had also hit for the cycle, making them only the second father/son duo to achieve the feat, following Gary and Daryle Ward. He also stole a pair of bases during the game, an even rarer occurrence, as only Charlie Moore, in 1980, had ever managed to hit for the cycle and steal multiple bases in the same game. In 100 games overall, he batted .234/.364/.429 with 35 extra base hits (16 home runs), 66 runs scored and 14 stolen bases.

He was the hero of the Jays' opening day win over the Tampa Bay Rays on July 24, 2020, as he led off the 4th inning by surprising P Charlie Morton with a bunt single, triggering a three-run inning, then followed that with a three-run homer off Morton in the 5th as the Jays won the game, 6-4.