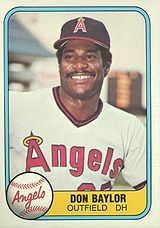 A versatile player, Baylor finished as high as second in the league in home runs (1978) and as high as fourth in the league in stolen bases (1976). He led the league once in sacrifice flies and eight times in hit-by-pitch. He is fourth on the all-time list for most hit-by-pitch (267) and, until Craig Biggio passed him, Baylor held the modern record for the most hit-by-pitch. In 1986, Baylor logged a 30/30 season - 31 home runs and 35 HBP. It was a deliberate approach for him to crowd the plate, daring the pitcher to come inside. He had a reputation as a tough cookie, who would never complain about getting plunked for the good of the team.

Don is the only outfielder in major league history who never doubled off or doubled up a runner. His career double play total is zero. Everybody else who has played 500 or more games had at least two. In the last three years of his career, Baylor appeared in the World Series each year, each time with a different team (the Boston Red Sox in 1986, the Minnesota Twins in 1987, and then the Oakland Athletics in 1988).

After his playing days, Baylor was a Milwaukee Brewers coach in 1990 and 1991 and was a member of the St. Louis Cardinals staff in 1992. In 1993, he became manager of the expansion Colorado Rockies, a job he held for six years. During his Rockie tenure, he was named National League Manager of the Year in 1995, leading Colorado to their first postseason appearance. After spending 1999 as an Atlanta Braves coach, he was skipper of the Chicago Cubs for two and a half seasons, beginning in 2000. He spent 2003 and 2004 on the New York Mets coaching staff and was a Seattle Mariners coach in 2005. He rejoined the Rockies as hitting coach in 2009, then in 2011 was hitting coach of the Arizona Diamondbacks, keeping the job until the end of the 2013 season.

In 2014, he moved to the Los Angeles Angels of Anaheim as hitting coach. In his first game back, Opening Day on March 31, 2014, he was given the honor of catching the ceremonial first pitch thrown by Vladimir Guerrero, who had signed a one-day contract to retire as a member of the Angels. The choice was appropriate, given Baylor and Guerrero were the only two Angels ever to win the American League MVP Award. However, Baylor suffered a freak injury as he moved to catch Guerrero's slow toss, buckling his leg and fracturing his femur. He had to be evacuated to a hospital to receive medical attention. He underwent an operation with a metal plate being inserted to hold up the bone. The Angels promoted assistant hitting coach Dave Hansen to replace him during his recovery and brought up minor league hitting instructor Paul Sorrento to the big league club to assist Hansen. Baylor was able to resume his duties midway through the season and stayed on for a second year in 2015, after which he was let go.

Baylor was diagnosed with multiple myeloma, a form of cancer that attacks plasma in the bone marrow, when he was a Mets coach in 2003. The condition is usually fatal within five years of diagnosis. He managed to beat the disease for many years and became a major fundraiser for research against the condition, particularly in trying to put together a database of patients in order to help doctors and researchers track trends and share information. He was working with former pitching coach Mel Stottlemyre Sr., also a multiple myeloma survivor, on fundraising efforts, with the two mindful of fellow coach Vern Ruhle, who had died of the disease at 55 a few years earlier. Baylor passed away from the disease in 2017.