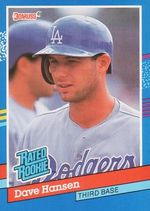 Dave Hansen was signed by scout Gib Bodet for the Los Angeles Dodgers as a 2nd round pick in the 1986 amateur draft.

He was a coach for the 2007 Mobile BayBears. In 2011, he became a Dodgers coach. At first, he was only a "special assistant" coach, but on July 20th, he was promoted to hitting coach when the Dodgers fired Jeff Pentland with the team struggling at the plate.

In 2013, he moved to the Seattle Mariners to be their hitting coach, then in 2014 became assistant hitting coach of the Los Angeles Angels of Anaheim. Hansen moved up to hitting coach in 2016 and stayed in that position for 2 seasons. He was let go after 2017.