Note: This page links to All Star pitcher and coach Mel Stottlemyre. For his son who played in 1990, click here. 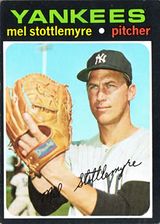 Mel Stottlemyre was a standout starter for the New York Yankees, posting a 2.97 ERA and 112 ERA+ and hurling 40 shutouts during a workhorse eleven-year stint in pinstripes. A five-time All-Star who won at least twenty games three times, he was one of the most durable and consistent staff aces in the American League. Relying on a terrific sinker, he routinely finished what he started while never pitching less than 251 innings during his nine full seasons. After his playing days, he became a highly regarded pitching coach for several big league clubs.

Signed at 19 by the Yankees in 1961, Stottlemyre was in top form by 1964, leading the International League with a 1.42 ERA for the Richmond Virginians. In August he joined the New York rotation, going a sharp 9-3 with a 2.06 ERA in 13 outings, 12 as a starter. A capable batter, he helped himself to a two-hit win in a September 26th contest against the Washington Senators with 5 hits of his own. Thanks to his boost the Yankees held off the Chicago White Sox by one game to reach the 1964 World Series. Surprisingly for a rookie, he made three starts against St. Louis Cardinals ace Bob Gibson, including the decisive Game 7, going 1-1 against the future Hall of Famer. It was the Bombers' fifth straight Fall Classic and ninth in ten years, but would prove to be Stottlemyre's lone trip there, the start of an eleven-year Yankee drought that would only end two years after he retired.

As good as he'd been in 1964, Stottlemyre picked right up in the spring of 1965, winning 20 games and leading the American League with 18 complete games. An AL All-Star as a sophomore, he repeated the honor in 1966 despite losing a league-leading 20 games in a Yankee plunge to last place. He bounced back with a career-best 21 wins in 1968 and recorded 20 victories en route to a career high 24 complete games in 1969, one of seven times he was in double figures, including three years with 19. Named an All-Star each year from 1968 to 1970, he put up huge inning numbers again in 1971, 1972 and 1973, before a torn rotator cuff brought his career to an early end at just 32 midway through 1974.

Returning to the game three years later, the Washington native served as roving minor league pitching coach for the Seattle Mariners from their inaugural season in 1977 until 1981, then the New York Mets from 1984 to 1993, and the Houston Astros in 1994 and 1995. He joined the Yankees' staff in 1996 and earned five World Series rings in a celebrated decade as their pitching coach. Leaving on a high note, he took a two-year break from the game before returning for another stint as a Mariners coach in 2008 and 2009. At the Yankees' 2015 Old Timers Day, the team surprised Stottlemyre by awarding him a plaque in Monument Park.

Stottlemyre is the father of big leaguers Mel Stottlemyre, Jr. and Todd Stottlemyre and brother of Mariners minor leaguer Jeff Stottlemyre, who pitched in their chain from 1980 to 1983. A third son of he and his wife Jeannie, Jason, died of leukemia as a child. For many years, the family lived in Mabton and Yakima, Washington; they then split their time between Issaquah, Washington and New Jersey. He passed away in January 2019, the victim of bone marrow cancer at age 77.