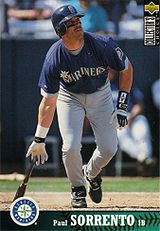 Power-hitting first baseman Paul Sorrento spent more than a decade in the majors.

Sorrento played college ball at Florida State University, where he hit 17 home runs as a freshman. As a junior, he led the team with 22 homers and 86 RBIs as the school was runner-up in the 1986 College World Series.

Sorrento was selected by the California Angels in the fourth round of the 1986 amateur draft and signed by scout Al Goldis. Following the 1988 season, he was traded to the Minnesota Twins in the deal that sent Bert Blyleven to the Angels. With the Orlando Twins in 1989, he led the Southern League with 35 doubles and 112 RBI. His 27 home runs were second to league MVP Eric Anthony's 28, and he earned a spot on the circuit's All-Star team. That September, he earned a big league call-up, and he went 5-for-21 in 14 games. He split the next two summers between Minnesota and the AAA Portland Beavers.

Prior to the 1992 season, Sorrento was dealt to the Cleveland Indians for Curt Leskanic and Oscar Munoz. He was Cleveland's regular first baseman that year, and on Opening Day, he recorded the first hit ever at new Oriole Park at Camden Yards, a single off Rick Sutcliffe. He ended the season with a .269 average and 18 home runs. He spent four years as the Indians' first baseman, hitting 25 homers in 1995, his final summer with the club.

Sorrento became the hitting coach of the Inland Empire 66ers in 2012 after a dozen years away from the game. He was then the Roving Hitting Instructor for the Los Angeles Angels in 2013 and was slated to be in that role again in 2014, until major league hitting coach Don Baylor broke his femur bone in a freak injury on Opening Day, March 31st, putting him on the shelf for a while. Assistant hitting coach Dave Hansen was asked to take over for Baylor, and Sorrento was added to the coaching staff to assist him. When Hansen was named hitting coach for the Angels in 2016, Sorrento was named assistant hitting coach, staying until the end of the 2018 season. He was then re-hired as a supernumerary coach in 2019, with the title of "hitting instructor".