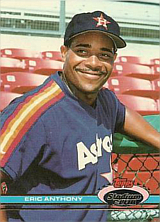 "It's hard to find guys who can hit homers in the Astrodome, but this guy is the real thing." - an NL scout

Eric Anthony was signed by the Houston Astros and scout Reggie Waller as the 34th round pick in the 1986 amateur draft. In 1989 he led the minor leagues with 31 home runs and was named MVP of the Southern League. He hit 28 home runs with the Columbus Mudcats, 2 after a promotion to the Astros, then 3 more after a demotion to the AAA Tucson Toros.